Full Steam Ahead by Karen Witemeyer
My rating: 4 of 5 stars
Source: Received from Publisher to review
Genre: Historical Christian Romance

Book Description: When Nicole Renard returns home to Galveston from an eastern finishing school, she's stunned to find her father in ill health. Though she loves him, he's only ever focused on what she's "not." Not male. Not married. Not able to run their family business, Renard Shipping.
Vowing to secure a suitable marriage partner, Nicole sets out with the Renard family's greatest treasure: a dagger personally gifted to Nicole's father by the pirate Jean Lafitte. Many believe the legend that the dagger is the source of all Renard Shipping's good fortune, though Nicole is sure her father's work ethic and honorable business practices are the keys to their success. Before she can board the steamer to New Orleans, Nicole finds her father's rivals—the Jenkins brothers—on either side of the gangplank, ready to grab her and steal the dagger. Quickly, she decides to instead travel north, to Liberty, Texas, where she can decide what to do next.Darius Thornton needs a secretary—someone to help him get his notes in order. Ever since the boiler explosion aboard the "Louisiana," Darius has been a man obsessed. He will do anything to stop even one more steamship disaster. The pretty young socialite who applies for the job baffles him with her knowledge of mathematics and steamships. He decides to take a risk and hire her, but he's determined her attractive face and fancy clothes won't distract him from his important research.The job offer comes at exactly the right time for Nicole. With what Darius is paying her, she'll be able to afford passage to New Orleans in mere weeks. But Mr. Thornton is so reclusive, so distant, so unusual. He can create complex scientific equations but can't remember to comb his hair. And his experiments are growing more and more dangerous. Still, there are undeniable sparks of attraction between them. But Nicole is leaving soon, and if she marries, it must be to a man who can manage a shipping empire. Darius certainly doesn't fit that description. And the Jenkins brothers have not given up on kidnapping Nicole and seizing the Lafitte dagger for themselves.

My thoughts: This is the second book of Karen Witemeyer's that I have read. Both have been well worth the time invested in a great story.

Nicole is a young lady in the mid 1800's. Her father is the owner of a shipping company who is sick and deteriorating. She comes home to see how frail he has become. Because of his illness, his enemies have pounced and are trying to steal a family heirloom. Nicole does the only thing she can think of, leave home with the dagger, leave a false trail and try to lure the enemies from her family.

Nicole is not an average debutante. She played pirates as a child, and is skilled with weapons. She does not shrink from anything unpleasant, but throws herself wholeheartedly into everything she does. This made her the perfect secretary for the eccentric scientist, Darius Thornton. He is haunted by an accident a year and a half ago, he is on a mission to find a safer way to power steam engines. Nicole becomes his match, in more ways than one.

This book is very cute. I enjoyed the matching of personalities and wits between Nicole and Darius. They both have strong personalities and are not afraid to express opinions. The attraction builds the more time they spend together, letting them know that the other person is their equal.

There is some action and drama. This added to a fun book. I will be looking for more books from Karen Witemeyer. 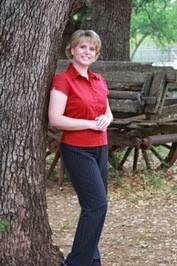 About the Author:  CBA bestselling author, Karen Witemeyer, writes historical romance fiction for Bethany House, believing that the world needs more happily-ever-afters. In 2011, her debut novel, A Tailor-Made Bride, was a finalist in the Best First Book categories for both the prestigious RITA® award and the National Reader's Choice Award. Karen holds a master's degree in Psychology from Abilene Christian University and is a member of ACFW, RWA, and her local writers' guild. She is an avid cross-stitcher, shower singer, and bakes a mean apple cobbler. Karen makes her home in Abilene, TX with her husband and three children.

Visit her website.
Posted by Bookworm Lisa at 4:30 AM