Susan Abel Sullivan tells why she loves the paranormal. +G!veaway 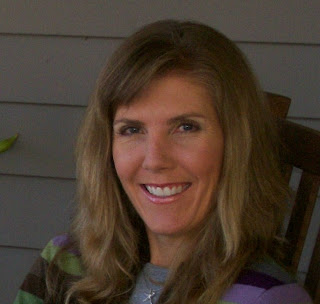 Why am I drawn to the paranormal?  You might as well ask, “Why do you have blue eyes and blonde hair?”  I truly believe I was born with a penchant for the paranormal.
For as long as I can remember (which is a pretty long time), I’ve been enamored with monsters, ghosts, and things that go bump in the night. Barbie and Ken just didn’t hold a candle to movie monsters like Dracula, Frankenstein, and the Wolf Man.  I grew up with aunties who told supposedly true tales of ghosts and goblins in rural Alabama every time they visited.  On the other side of the family, my granddad had a spook story of his own: The Hatchet Lady of Lake Martin. I spent many weekends and summers at my grandparents’ lake cabin being scared of the hatchet lady and loving every minute of it.
Of course, every weekday afternoon from 1966-1971 I was glued in front of our black and white TV set for yet another hypnotic episode of Dark Shadows.  The gothic soap opera captivated me to such a degree that when my mom gave birth to my brother in 1969, I wanted her to name the baby either Barnabas or Angelique.  She didn’t.  She named my brother and sister after the characters in the Dick Van Dyke Show (Rob & Laura).  I was also a big fan of paranormal prime time shows like Night Gallery with Rod Serling and Kolchak: The Night Stalker.
My room as a kid was decorated in early-to-mid-20th-century monster to such a degree that my best friend wouldn’t spend the night over because the glow-in-the-dark shrunken voodoo head on my dresser scared her too much.  Putting it in the closet didn’t work because she knew it was still there.
It takes a strong imagination to suspend disbelief for made-up things, which is why some people prefer non-fiction to fiction.  It takes a powerful imagination to suspend disbelief for made-up things that don’t exist in the real world like vampires, werewolves, Godzilla and King Kong, as well as fairies, elves, goblins and hobbits.   And my imagination not only likes to work overtime, but has the muscles of an Olympic weight lifter . . . on steroids.
Interestingly enough, real monsters like Hitler and serial killers scare the hell out of me.  Because these people really exist.  And I’ve never been a fan of Slasher films like Halloween, Friday the 13th, and Nightmare on Elm Street for the same reason.  They’re too much like real life.
So, yeah, me and the paranormal are like two peas in a pod.  And yet, when people see my picture or meet me in person they very often say, “But you look so normal.”  Uh huh.  Normal on the outside.  Paranormal on the inside.  Like Jessica Rabbit says in Who Framed Roger Rabbit,“I’m not bad; I’m just drawn that way.”  And so it goes for me.  I’m just drawn that way when it comes to creepies, crawlies and things that go bump in the night.
About Susan: Susan Abel Sullivan lives in a Victorian house in northeastern Alabama with two dogs, way too many cats, and a ghost. When not writing she likes to get her groove on by teaching Zumba classes. She is a graduate of the Odyssey Writing Workshop for speculative fiction. Her short fiction and poetry have appeared in numerous online and print publications, including Asimov’s Science Fiction Magazine, Andromeda Spaceways Inflight Magazine, ASIM Best of Horror: Vol II, Beyond Centauri, New Myths, AlienSkin, and Writers’ Journal. She is currently working on a YA novel about the supernaturally challenged. Visit her website at susanabelsullivan.weebly.com or twitter @susan_abel.
Lucky for you, you have the opportunity to win a copy of her book! 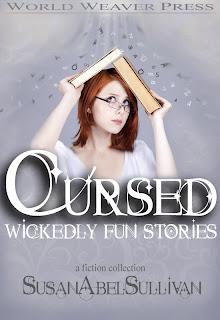 About the book: "CURSED: Wickedly Fun Stories" is a speculative fiction short story collection for young adults featuring witches, werewolves, limericks that can change fate, and a sinister vine bent on murder and the destruction of Alabama.  This collection features pieces previously published inAndromeda Spaceways, Inflight Magazine, AlienSkin, and Beyond Centauri, as well as a never before published short.
Where can you find the book?
Amazon.com for Kindle


BarnesandNoble.com for Nook
Smashwords.com for most devices and computers (.mobi, .epub, .lrf, and others)
To enter.  You must be 13 or older.  This is for an electronic copy of the book, whichever format you would like.  Use the rafflecopter to enter.  Please see my full review policy in the right side bar.  This contest runs until April 25th,