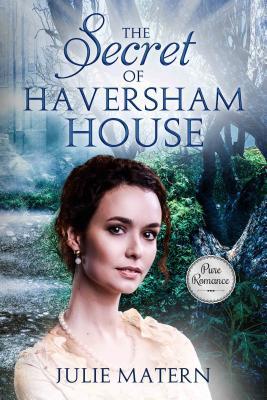 The Secret of Haversham House by Julie Matern
My rating: 4 of 5 stars
Source: Received from publisher to review
Genre: Historical Romance

Book Description:  Francesca Haversham is eighteen years old and about to step into a glittering future--all she has to do is secure her wealth with an advantageous marriage. Then she learns the truth: her entire identity is a lie. Now Francesca faces a horrible choice. Will she give up all she knows or continue to lie about her past and risk everything, including her heart?

My thoughts: This book is titled The Secret of Haversham House, but instead of using the word Secret, I think Secrets would be appropriate.

I loved the start of the book. A couple who have longed and prayed for a baby are unexpectedly given the opportunity to be parents to a beautiful baby girl. The problem is that they are British Nobility and blood lines are everything to the peerage.

I found myself thinking about love and loyalty while reading this book. Who are the people who will stay close to you when they find out that you are not exactly what they imagined you to be? Does birth parents compared to adopted parents really matter? Who will try to take advantage of you for their own gain? There are many points to contemplate.

I enjoyed the fact that this is a book about love. There is romantic love, but there is so much more. There is love and acceptance from family near and far. Francesca has many more people who care about her for who she is that who would ridicule her for her birth circumstances.

This book is well written. It has a feeling and a flow to it that you would expect to find in a book written years ago, rather than recently. The main secret is revealed from the start, so I didn't feel it was a spoiler to discuss it in this review. There are many more secrets that are revealed one at a time. A title does not mean someone is a good person, while someone of lowly birth can be full of integrity and honor.

This book discusses pre-marital relations and a person who ruins women's reputations on purpose. I found this to be clean and thoroughly enjoyed my time reading it.

Francesca stopped breathing as Mr. Ashbourne gently took her gloved hand in his and expertly spun her around the room, leaving her former partner spluttering at the lack of manners, in the center of the dance floor. She became dizzy at the realization that Mr. Ashbourne was actually dancing with her. After several turns, he lowered his head and whispered into her ear, his nose tickling her skin and sending a thrill up her spine, causing a delicious sensation in her midriff. “Are you unwell?” he asked. “You look faint.” She recovered herself and observed that he had a playful smile on his lips, fully aware of the power his presence had on young ladies. Not wanting to appear as inexperienced as she really was, she blurted out, “Oh no, you merely surprised me, that is all.” “Then I shall take pleasure in surprising you whenever I can as it only serves to heighten your beauty!” Francesca’s cheeks burned under his scrutiny and she bent her neck to avoid his piercing gaze and gather her confused thoughts.

About the Author:  Julie Matern is a resident of Utah. She attended the University of Exeter in Exeter, England, and graduated with a double major in French and Education. She was born and raised in England, moving to America after her marriage and is the mother of six children. She has served in the PTA for over 20 years, taught tap dance, and enjoys amateur photography. She is the author of ‘British War Children’ ( for which she received a “Recommended Read” award from the League of Utah Writers) and ‘British War Children 2: An Enemy Among Us’.
Hometown: Highland, UT
FACEBOOK | TWITTER | WEBSITE 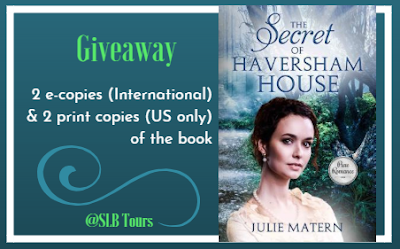 
July 23-The Power of Words | Paulette’s PapersJuly 24-Life is What It’s Called | Encouraging Words From the Tea Queen | Blooming with BooksJuly 25-Pause for Tales | Reading Is My SuperPower | Singing Librarian BooksJuly 26-Heidi Reads… | Bookworm Lisa | Why Not? Because I Said So!July 27-Remembrancy | Reading, Writing & Stitch-Metic July 28-Edits and Reviews by Leslie | Jorie Loves A Story​