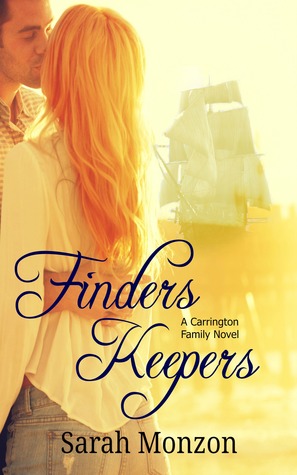 Book Description:  Three lives. Three hundred years. One ship that ties them together.

The same evil that stole her mother’s life stalks Isabella Castellano. Afraid for her safety, Isabella disguises herself as a cabin boy and hires on to one of His Majesty’s treasure fleet vessels. But has her flight from a known threat only led her to be ensnared in a sea of dangers?

Summer Arnet will go anywhere to capture the perfect shot that will get her marine photography noticed by the prestigious nature magazine, Our World—even diving in waters haunted by great white sharks. When a treasure hunter with a ladies’-man reputation approaches her about a sunken ship at one of her dive locations, it may be the chance she’s been looking for to launch her career…if his charming smile doesn’t derail her first.
A past tragedy has left a hole in Trent Carrington’s life—a hole he’s tried to fill with women, money, and adventure. Could the feisty marine photographer be the missing piece, or will Trent finally accept that the treasure he seeks can’t be found where rust and moths destroy?


My thoughts: I enjoyed how Sarah Monzon was able to give me two books in one to read. The book follows two story lines that connect in the present day.

Isabella dressed herself as a man to gain passage on a ship to bring her to the New World. She had the clothes on her back and an heirloom from her grandmother. She was running from an abusive step-father and ran to an adventure and danger on the seas.

Present day, Summer is a marine photographer who is trying to make a name for herself. In order to be published by the magazine she has always wanted to work for, she must find a photo shoot with an edge. Something that will propel her above the other photographers. That is where Trent enters. Trent is a womanizing man who happens to search for lost treasure. He sees a shadow in one of Summer's pictures that leads them on an adventure.

This book is more than discovering sunken treasure. It is about finding oneself and purpose. It is also a religious journey. This book has characters who are far from God and find him while finding themselves.

This book is a clean book with innuendo

Sarah Monzon is a pastor’s wife and a stay at home mom to the two cutest littles in the world.  Playing pretend all day with them isn’t enough, she spends the evenings after their heads hit the pillow to create her own imaginary characters.  When she isn’t in the world of make believe, she can be found in a small desert town in central Washington taking care of her family, fostering friendships, and enjoying all the adventures each day brings.
GOODREADS | FACEBOOK | TWITTER | AMAZON | WEBSITE

Summer's cell vibrated on the desk next to her outstretched hand. The ID registered a number she didn't recognize. She tapped the green Accept button.“Hello?”“Hey, beautiful, you want to grab some coffee?”Furrows formed between her eyes. Who in the world? “I'm sorry. You must have the wrong number.”She pulled the phone away from her ear but stopped short of disconnecting when she heard the voice on the other end say her name.Her lips turned down. “Who is this?”“Who do you think it is, babe? I told you I'd call.” Summer hadn't known it was possible to hear a smile until then. The flirtatious, mischievous smile she'd seen on Trent Carrington's face before resounded over the phone lines. And babe? Really? She set her teeth. The guy knew it irked her to be called that, but it seemed he got perverse pleasure in pushing her buttons.Ignore it. If he can't get a rise out of you, he'll eventually stop. At least that was how it had worked when the boys had teased her in elementary school.Summer stared at her computer screen. She really needed to get these photos edited by the end of the day. “I'm in the middle of something right now, Trent. If this is about the trip, you can e-mail me the itinerary.”The door to her studio pushed open, and there stood Trent. All six foot plus of him. The sun shone through the open door, causing his blond hair to glow like gold. One side of his mouth whirled up in a lopsided grin. Her breath whooshed out. From irritation. Obviously. The reaction couldn't have been for any other reason.“I'm not taking no for an answer.” Summer heard his voice from across the room as well as from her cell. She hung up and sent him a glare.“As you can see, I'm working.” She indicated the screen in front of her.He walked across the room and sat in one of the chairs opposite her desk, leaning back in it like he had all the time in the world.“Coffee will only take fifteen minutes.” He bestowed one of his flashing smiles upon her.Summer looked at him. She took in his laid-back manner, the way he was quick to smile, and the ease in which he charmed. For goodness’ sake, the man thought all he had to do was smile and he'd get his way. She pursed her lips. Already she'd given in to him, but that was because she needed some edgy photos forOur World, not because he'd smiled at her, said pretty please, and made her go all gooey inside.Someone needed to start telling this man no.“Thank you for the offer, but I really don't have time right now.”He continued to lounge in her chair, his gaze never leaving her face, the lopsided grin never faltering. “All right. No problem.”Really? He wasn't going to put up more of a fight? No cajoling? No begging? No persuasion of any kind? Summer was surprised at the twinge of disappointment in her midsection. Guess he didn't think her worthy of any added effort.Trent stood, and Summer's eyes followed the motion. His gaze continued to lock on her, and she swallowed hard.“I'll just go and bring some coffee back. Better that way anyhow. Now I won't have to worry about getting you back at a specific time. And since I don't have anything else going on right now, I can stay and keep you company while you work. I could stay all day if I wanted to.”All day? Her nerves already stood on end with his constant stare. No way she'd be able to get any work done. And how so like him to manipulate a situation so he got exactly what he wanted. Any twinge of disappointment was replaced with annoyance.She met his gaze and took in the cocky slant of his eyes. He thought he was so irresistible. One look, one smile, and she'd fall all over him. Not going to happen.“Do you always get what you want so easily?”His head tilted as if thinking it through, then his eyes bored into hers once more. "No. Not everything is worth pursuit. But when I find something special, I'll do everything within my power to claim it as mine."