Launching the Blog tour for "Daynight" by Megan Thomason

On Tour with Prism Book Tours...

It's time to leave Earth and cross over to the other side... it's not as far away as you think!!

Megan Thomason lives in paradise aka San Diego, CA with her husband and five children. A former software manager, Megan vastly prefers writing twisted tales to business, product, and marketing plans. When she isn't typing away on her laptop, she's reading books on her phone—over 600 in the last year—or attending to the needs of her family. Megan’s fluent in sarcasm, could potentially benefit from a 12-step program for road rage, struggles with a Hot Tamales addiction, loves world travel & fast cars and hates paperwork & being an insomniac. Daynight is Megan's first published novel, but fourth written one.


Welcome to the "Second Chances" daynight blog tour! Over the next few day/nights I am really excited to share with you:

- Over $300 of daynight-related prizes as a giant THANK YOU to the thousands ofdaynight early adopters and those who have yet to enter the twisted world of The Second Chance Institute and Thera. Want to prepare for Exile? Or an overday date with Ethan? Have breakfast for dinner? Glam it up in Garden City? There are *12* prize packages to be won! We'll introduce a new package every day of the tour so you'll have a second, third & so forth chance to win.

- The launch of clean slate complex (a daynight story)... For those who have read daynight you can learn more about what the SCI is up to on Earth (surely nothing good). For those who haven't read daynight this is a great way to get your feet wet...test the waters so to speak. I warn you though...the SCI's like Jaws Jr and the giant school of barracuda I encountered on my recent vacation--pretty from a distance, but up close they've got a lot of bite ;).

- Posters, teasers and guest posts about the themes of daynight and clean slate complex... Plus, I'm fully prepared to sneak in some nuggets about what to expect in the daynight sequel, arbitrate.

Thanks again for joining us on the tour and for your support of daynight. I'm grateful for all of you and humbled by your support.


Introducing...  the new Novella:  FREE for the Tour!
On Smashwords!


Meet The Second Chance Institute (SCI): Worldwide non-profit and do-gooder organization. Their motto: Because Everyone Deserves a Second Chance at Life(TM). Reality: hidden behind every kind act is a dark agenda designed to gain control and force societal and moral extremes. Currently, the SCI’s pushing Project Liberate, a program to woo the poor and downtrodden into their Clean Slate Complexes—where “everything is provided” from jobs to food, shelter, clothing, and education. Unfortunately, as with all things that sound too good to be true, there’s a catch…

Meet Alexa Knight. Feisty, tough and currently homeless in Los Angeles, Alexa agrees to help the SCI in return for medical care for her sick mother. When she starts to suspect there’s more to the SCI than meets the eye will she believe Adam—the boy who saved her life and the SCI’s biggest champion, or Joshua—the attractive enigma who sings about conspiracy theories and pretends to be someone he’s not?

Full of action, humor, romance, twists and turns, clean slate complex is a companion story to the highly-praised dystopian novel, daynight. It can be enjoyed before or after readingdaynight.

Choose what you enter to win wisely. Your stay on Thera may be extended indefinitely. 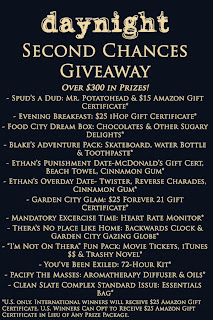 Highlighting a different giveaway every daynight of the Tour... International Winners will receive a $25 Amazon Gift Certificate and US Winners may choose $25 GC in lieu of Prize Package.

US only. International winners will receive $25 Amazon gift certificate. US winners can opt to receive $25 Amazon gift certificate in lieu of any prize package.Open only to those who can legally enter. Winning Entry will be verified prior to prize being awarded. No purchase necessary. You must be 18 or older to enter or have your parent enter for you. The winner will be chosen by Rafflecopter and announced on Rafflecopter and Grand Finale posts as well as emailed and the winner will have 48 hours to respond or a new winner will be chosen. This giveaway is in no way associated with Facebook, Twitter, Rafflecopter or any other entity unless otherwise specified. The number of eligible entries received determines the odds of winning. Giveaway was organized by Burgandy Ice @ Colorimetry and Prism Book Tours and sponsored by Megan Thomason. VOID WHERE PROHIBITED BY LAW.

a Rafflecopter giveaway
Posted by Bookworm Lisa at 2:30 AM