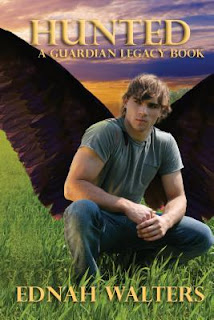 Hunted by Ednah Walters Bran and Lil may have escaped an attempt to lure Lil to the dark side, and recovered the contracts damned people signed with Bran when he was a soul collector, but someone forgot to tell them that no one switches sides or cancels contracts without consequences. Hunted by an unknown but powerful enemy, Lil, Bran and the Guardians must seek help from unlikely sources to avert total annihilation of the Guardians. When they finally face their enemy, one of them may have to make the ultimate sacrifice.


“Come on, Lil,” a female voice urged.
“I think she’s coming around,” a male voice said.
I lifted my eyelids. At least I thought I did. There was nothing but blinding whiteness. I strained until the blue sky and faces inked in. Unfamiliar faces. Two women and one man. Their eyes were filled with concern as they stared down at me. Beside them were familiar faces—Bran, Grampa and Aunt Janelle, Kim, Izzy, Remy, Sykes and Kylie, but they began to fade.
“No, don’t leave me,” I cried out and reached out for them.
“Not so fast,” one of the unfamiliar women warned and pressed my shoulder down. “You had a nasty fall.”
I struggled against her hand and sat up. Black dots appeared in my eyes and a sharp pain radiated from the back of my head. I closed my eyes until the dizziness passed, then raised a trembling hand to my head. There was a huge bump the size of an egg, and my skull felt like someone was hammering it with a blunt object.
Squinting, my gaze moved from her to the other woman, then the man. They all wore black pants and matching shirts, a uniform of some kind, and had daggers in sheaths strapped around their waist and their thighs. I’d never seen them before in my life, yet they watched me with such concern.
I inched away from them and noticed I wasn’t dressed like them. I wore a bikini and was lying down on a towel. Frowning, I took in our surroundings. We were on a grassy patch by a pond in the middle of a forest. The trees were so tall and curved in such a way that was unnatural. It was like they deliberately curved to block the skyline or hide the pond.
Why couldn’t I remember where I was or how I got here? What was my name?
My gaze moved back to the woman squatting beside me. I wondered whether to ask her these questions, but survival instinct stopped me even though I didn’t feel any negative vibes from her.
I scooted backward and realized my grip was around a dagger. Intrigued, I studied it. It had a clear, wavy blade and green stones on its gilded hilt.
Seeing the dagger switched on something inside my pounding head. Memories of places and people rushed back—I saw myself entering a booth in an arena, where a familiar man with red hair called me his daughter; attempting to escape a dark-haired woman who claimed to be my half-sister; a huge black man with soft brown eyes helping me, and another with short-cropped blond hair swearing allegiance to me…
If my head wasn’t pounding, I would have laughed with triumph. My name was Lil Falcon. I was a Psi Cardinal Guardian within the Northeast Sector, and I hunted demons.

1.     Do you have any rituals that you need in place before you can write?

First, I must have Internet access because I research as I write. I also like background sounds/noise. Most of the time I have the radio on or reruns on Hulu or Netflix playing on my daughter’s desktop.

2.     Is there any one instance that comes to mind about receiving writing inspiration?

This might sound insane but I could be at an indoor playground with my kids and a young/teen couple walks by hand-in-hand and I’d start wondering about their story. Next thing, I have a visual of what my character should be doing.

To me, writing is like reading. I love seeing the story unfold. After the first three chapters, I’m usually in the zone, my characters talking to me, leading me where they want to go. I hate the beginning because you have to lay out your main character’s goal and motive behind it, and at least something that will stop her from obtaining that goal.

4.If you could sit down and talk to any writer from the past or the present, who would it be and why?

Cassandra Clare because I love her books

4.     What was your childhood dream of your future career?

I wanted to be a doctor but after watching my brother treat wounds, I did the sensible thing and went with chemistry

5.     What was the feeling when your first book was published? Does it get better with each book?

I was euphoric. Nothing can ever beat the first time I held a copy of my book. 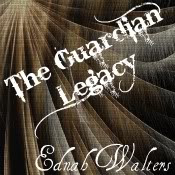 Author Ednah Walters
I grew up reading Nancy Drew and Hardy boys mysteries, hence Stratemeyer influence, before I graduated to Mills & Boons (starting with Janet Daily's Shutter the Sky) and the rest is history. I enjoy good love stories, tingly mysteries and wondrous adventures. When I finished my college and decided to be a stay-at-home mother, I devoured books like they were going out of production, until reading just wasn't enough. So I started to write. I've written picture books, contemporary and romantic suspense, biracial/multicultural books, and finally YA fantasy. Awakened is the first book in The Guardian Legacy series. I'm working on book 2, tentatively named Betrayed. When I'm not writing, I do things with my family, five children or my darling husband of 18 years. I live in a picturesque valley in Utah, the setting for my series.


Blog Tour Giveaway $25 Amazon Gift Card or Paypal Cash Ends 4/28/13 Open only to those who can legally enter, receive and use an Amazon.com Gift Code or Paypal Cash. Winning Entry will be verified prior to prize being awarded. No purchase necessary. You must be 18 or older to enter or have your parent enter for you. The winner will be chosen by rafflecopter and announced here as well as emailed and will have 48 hours to respond or a new winner will be chosen. This giveaway is in no way associated with Facebook, Twitter, Rafflecopter or any other entity unless otherwise specified. The number of eligible entries received determines the odds of winning. Giveaway was organized by Kathy from I Am A Reader, Not A Writer http://www.iamareader.com and sponsored by the author. VOID WHERE PROHIBITED BY LAW. a Rafflecopter giveaway
Posted by Bookworm Lisa at 3:30 AM