Book Description: 200 years ago, the Brothers Grimm changed everything.

With the help of a little magic, fairy tales were made real, manifesting all over the world. Charming princes. Gold-hunting dwarfs. Terrible step-mothers. Heroic animals.

Then, slowly, they began to change. Everyone—from Prince Charming to the old miller—grew more evil. Corrupted. A hero was chosen to stop them, hunting them down one by one and destroying them with the help of a magic pen and a special rabbit assistant.

For 200 years, the hero’s magic pen has been passed on from generation to generation. The newest hero is Alice Goodenough, an 18-year-old junior from Washington High School. While her friends spent their summer working and having fun, Alice found herself doing battle with creatures most human beings don’t even realize exist. A giant snake. A blood-sucking prince. A terrifying half-man, half-hedgehog. Dastardly dwarfs intent on mind-controlling everyone who uses a cell phone.

Now, senior year has begun. With it comes a new challenge at school, where bullies have grown bolder and classes more challenging. As if that’s not enough, Alice must face off against a collection of Corrupted who all share a terrible secret, one that might awaken a creature capable of doing untold damage. To uncover the secret, Alice will have to face off against a man-eating lizard, a bloodthirsty sea captain, and a mysterious wizard who can see into the future …

Episode four: The Orphanage of Doom
Episode five: Blood and Thunder
Episode six: The Order of the Golden Dragon

Bonus material:
The Lost Journal of Eugene Washington
Assorted fairy tales by the Brothers Grimm
A Legacy of Red


My thoughts:  I liked this second installment of The Grimm Chronicles better than the first. The main character, Alice, has been defined better. She finally gets what she is doing and is a little more comfortable in her role as a hero. She is not happy with it, just knows more of what the job entails.

In this installment she has picked up a few sidekicks that know of her secret life and are able to offer advice and help when she needs it. I like the camaraderie better, I like how the boys tease and play off of Briar, the bunny, err rabbit. Briar is the character that holds everything together. When things get crazy, he is there to help save the day and add a little comic relief.

I like the excerpts from diaries of past heroes. I feel that it adds quite a bit of character to the book and shows how heroes have worked in the past 200 years. I did have a minor issue with Eugene, the ex-slave from the 1800's saying anywho, but that is a minor annoyance.

In this series of novella's, Alice is faced with a magical creature who plagues her dreams. He is the head of an order that is set to bring a dragon into the modern world. The stories at the beginning store up clues that bring the reader to an understanding of what the plans of the fairy tale creatures are.

There is some swearing and violence in the book. 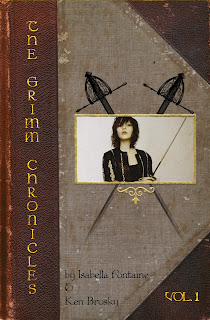 This book contains the first 3 episodes of the critically acclaimed series:
Episode 1: Prince Charming Must Die!
Episode 2: Happily Never After
Episode 3: Revenge of the Castle Cats

The Grimm Chronicles is intended for Young Adults aged 13 and up. The goal is to provide Young Adult readers with a strong, charismatic young woman in the role of the hero and provide readers with a positive protagonist who uses her brain to overcome obstacles life throws in her way.

"Highly recommended for all who love fairy tales and the YA genre." ~ My Cozie Corner

"All in all the books were excellent." ~ LilyElement

"If you love fairy tales and them being turned into modern day stories you will love these short stories." ~ Mom With a Kindle

“Isabella Fontaine and Ken Brosky’s incredible talent for storytelling takes the reader on an amazing action-packed ride fueled by endless creativity and limitless imagination. TGC is like a high-stakes version of Harold and the Purple Crayon meets a contemporary, above ground Alice in Wonderland. “ ~ Bookfetish

“I absolutely loved this book! No, let me rephrase that, I FREAKING LOVE THIS BOOK! Nope, that doesn't even do it justice. Vol. 1 has the first three stories from the 12 that will ultimately make up the chronicles.” ~ Jesse Kimmel-Freeman

The Grimm Chronicles: Volume 2
Book 4: The Orphanage of Doom
Book 5: Blood and Thunder
Book 6: The Order of the Golden Dragon


About the Authors
Ken Brosky received his MFA in fiction writing from the University of Nebraska-Omaha. He also teaches English at Madison College. This is his first Young Adult series.

Isabella Fontaine owns a farm in Wisconsin and enjoys reading weird books like House of Leaves. This is her first Young Adult series.