Book Description: Madly is your average nearly-eighteen year old girl—for a princess, that is.
Madly James is thoroughly enjoying her internship in the small town of Slumber when the unthinkable happens—there’s a prison break in Atlas, the magically-protected home of Madly’s race. A traitor has set free eight Lore, the spirits of what humans know as fairy tales, and they are making their way to Slumber to awaken their descendants. In order to save her home, the lives of her family, and all of humanity, Madly must learn to wield her exceptional powers and recapture the Lore before it’s too late and all is lost. But Madly’s only help are her two best friends and the Sentinel, Jackson Hamilton, that threatens both her heart and her destiny. Madly has loved Jackson as long as she can remember, but he is the one thing even a princess can’t have. Can she resist love to become the queen she was fated to be? Or can she find a way to have both?This novelette introduces you to Madly and prepares you for the quest of a lifetime.


My thoughts: Madly is a great introduction to the world of Mer's that M. Leighton created. I am intrigued and want to know more and how she will save her family and the people of Atlas.

Madly is a princess who has a sudden power surge of magic, she finds that there has been a prison break in her home of Atlas. She is the only person outside of Atlas who can send the prisoner's back to prison.

She has her friends to help her, as well as the boy/Mer she crushed on. She wishes she could feel the attraction for her betrothed as she does for Jackson, he's a sentinel and is now guarding her.


I really enjoyed this novella and will look forward to reading the books of Madly.  It's very short and easy to read.  No content warnings from me.

Giveaway!  This contest if for US/Canada.  There will be signed paperbacks of Madly, Madly & Wolhardt, and Madly & the Jackal.  Swag pack, and a Madly t-shirt.  Use the Rafflecopter form to enter.

Check out the Series: 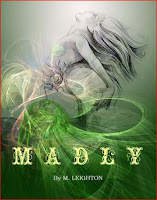 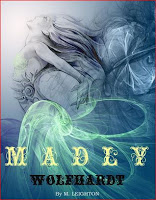 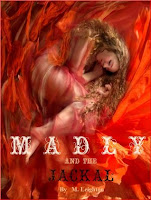 MADLY & Wolfhardt
Madly James is thoroughly enjoying her internship in the small town of Slumber when the unthinkable happens—there’s a prison break in Atlas, the magically-protected home of Madly’s race. A traitor has set free eight Lore, the spirits of what humans know as fairy tales, and they are making their way to Slumber to awaken their descendants. The first spirit to arrive is that of Ulrich Wolfhardt, a man that was once obsessed with wolves and a young maiden he would follow through the woods. After a bite from a wolf, Wolfhardt’s obsession with the girl became an unnatural hunger and the young maiden’s grandmother cursed him with a fate worse than death. And now he’s back…with a vengeance and a bite that can infect others as well.Madly must learn the identity of Wolfhardt’s descendant and stop him before he kills again and spreads his curse across the earth. But the only person strong enough to help Madly is Jackson, the Sentinel who vowed to protect her and the one person capable of breaking her heart. Can Madly resist forbidden love long enough to save the world from Wolfhardt? Or will she have to sacrifice her heart and her destiny to save the ones she loves?

MADLY & The Jackal
How deep does love run? Deeper than the ocean? Deeper than memory? Deeper than magic?Following their plan to save Atlas, Madly and Jackson return the spirit of Wolfhardt to his prison beneath the sea. But even the best laid plans couldn’t account for the surprises they find. This time, Lore aren’t their only challenges. Madly is special in ways no one could have guessed and dark forces seek to control her. They want her power, but first they must weaken her. They need her beaten. Vulnerable. Near death. And alone. But that task isn’t an easy one with Jackson at her side. The strongest of their kind, the only way to separate Jackson from Madly is to destroy his love for her, to erase it from his mind. And his heart. Is it possible to steal Jackson’s love from Madly? Or is their love the only truly unbreakable thing?