Book Description: She should have run. Now, she’ll have to fight.
Eighteen year old Birdie may be homeless, but she’s surviving, that is until a mysterious guy throws money in the air like a crazy game show host, and she grabs some with the idea she’ll be able to buy dinner that night. In that singular moment, unassuming Birdie becomes the girl in everyone’s viewfinder. Thugs want to kill her. Money-guy wants to recruit her. The very hot, very rich, and very out of her league Grey Mathews wants to save her.Birdie, though, wants nothing to do with any of them, until she realizes fate didn’t bring them all together. Her heritage did.Now, with only twenty-one days left, she’s got to decide whether to follow in the footsteps of those before her or risk her life for people she’s only just met.

My thoughts: I love the thought behind this book.  It deals with Norse Mythology.  I really like mythology in any form.  I have always been fascinated with the Vikings.  I love to read about them.  This book fills the love of two of my interests. (Yes, lots of love going on here.)

Birdie is a tough young woman.  She has lived through many situations that are less than ideal.  She has a good head on her shoulders and is able to think through the crisis that come to her.    She is cynical and sarcastic, two characteristics that I enjoy in a character.

I enjoy Julie's writing style.  She doesn't go into too much detail, but she doesn't leave out any pertinent information.  Her writing is straight forward and easy to follow and understand.  She has definitely caught my attention and is keeping it.  Always a good sign in reading a book.

I have to admit, at the time of writing my thoughts, I have not finished the book.  That is why I am not giving it a rating.  I am enjoying it thus far and would recommend it. (Getting my kids ready for school and the olympics are taking more time from my reading than I had planned. :)  )   I will put my finished review on Goodreads and Amazon with the rating.  I can't imagine at this point that I won't love it all the way to the end. It won't take me long to finish it. (It's 10:00 pm and I think that I really should get some sleep.)

A tall, blond, handsome-for-an-older-man guy, rushes toward me on the already crowded sidewalk, hauling an enormous black suitcase.


He plows ahead as though he doesn’t see me, clearly on a mission to get somewhere—fast. In his haste, he knocks my shoulder.


“Easy!” I say, rubbing my throbbing muscle through my coat sleeve. “Just minding own business and I get plowed into by a—" Familiarity hits me just as hard.


My eyebrows rise as a memory clicks in place. Oh, my gosh! Jeff Branner? My eighth grade science teacher? I do a double take. Can’t be him, can it? He’s way too tall.


“Fortune means nothing. This time we must not fail.”


A man with gray hair in a three-piece suit keeps pace behind the ‘Jeff’ guy. So do three young guys wearing army jackets, an old, Hispanic lady with a fox stole around her neck, and a mom pushing a sleeping kid in a fancy stroller. I’m not normally the groupie type but his money comment, along with his trail of disciples has me more than intrigued.


Hesitation grips me. The clock on the bank across the street reads, eleven-forty-three. The nice folks from St. Andrew’s Mission hand out food to street people at noon on Sundays. Their chili does a good imitation of runny dog chow, but I haven’t eaten for two days.


Yet the guy’s pull on me is irresistible. I turn toward him, conflicting ideas warring in my brain. Giveaways only happen on game shows and in the movies. That can’t be it, I reason. He could be some homicidal maniac with me his next victim.


Curiosity gives me a final shove. I abandon ideas of chili and jog to catch up with the others.


The young brunette pushing the stroller scowls at me over her shoulder.


‘Jeff’ surges ahead like a locomotive. We trail him, and his suitcase, three blocks before venturing down a side alley, away from the larger crowds.


He finally stops at a set of stone stairs, peers up and down the alley, empty aside from our little group. An iron gate wrapped in chains and padlocks seals entry to gothic oak doors at the top step. Ruby glass adorns both inner panels. The craftsmanship indicates wealth, but the building appears long abandoned.


Why is he stopping here?


The stench of urine permeates the surrounding concrete, suggesting homeless sleep in the alcove at night. The smell insults the pretty scene, but what can be done? This is Atlanta.


Jeff faces us, sweeps his dirty-blond hair back from his forehead. A five o’clock shadow darkens his jaw, while an expensive, taupe, trench coat envelops his body down to his calves. His face contorts as if in pain. If I had my sketchbook I would draw him and try to capture the exquisite expression of torture on his face.


“I’ve failed in my duty, ruined my life with pride and greed.” Despite his faded accent, he speaks in a clear voice. He rubs his hand over the back of his neck. “I’ve had everything, every pleasure money can buy. It wasn’t enough. I wanted the world.” 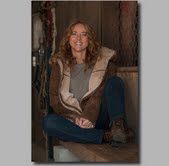 Born in Ohio, I lived next to my grandfather’s horse farm until the fourth grade. Summers were about riding, fishing and make-believe, while winter brought sledding and ice-skating on frozen ponds. Most of life was magical, but not all.

I struggled with multiple learning disabilities, did not excel in school. I spent much of my time looking out windows and daydreaming. In the fourth grade (with the help of one very nice teacher) I fought dyslexia for my right to read, like a prince fights a dragon in order to free the princess locked in a tower, and I won.

Afterwards, I read like a fiend. I invented stories where I could be the princess... or a gifted heroine from another world who kicked bad guy butt to win the heart of a charismatic hero. Who wouldn't want to be a part of that? Later, I moved to Florida where I continued to fantasize about superpowers and monsters, fabricating stories (my mother called it lying) and sharing them with my friends.

Then I thought I’d write one down…

Hooked, I’ve been writing ever since. I write historical, contemporary, urban fantasy, adventure, and young adult romances. I love strong heroines, sweeping tales of mystery and epic adventure… which must include a really hot guy. My writing is proof you can work hard to overcome any obstacle. Don’t give up. I say, if you write, write on!

Swag Giveaway!
Julie was kind enough to send me a waterbottle and signed bookmark to give away!  Leave a comment with your email address to enter for it.  I will ship it to any address that can take a package from the United States. The contest will end on August 10th.  Good luck! 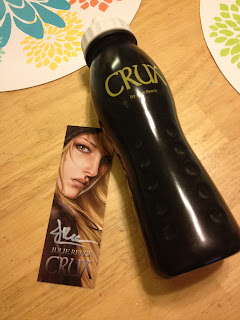 For all purchasing links.... go HERE!