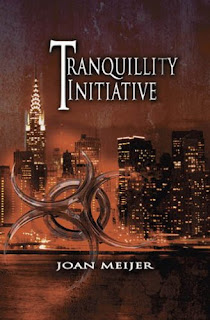 The United States is at war in endless war in Astrakhan. It is an election year. In order to extricate itself from the war President Charles Anderson authorizes the Tranquility Initiative - use of American Anthrax weaponry in Astrakhan. Two of the bombs are stolen from the American base in Turkey and smuggled into New York. One bomb is opened accidentally - which puts the city on notice of the threat. Dr. Cassandra Williams of the CDC and Senator Richland Powell must use every ounce of intelligence to find the terrorists and stop them. Unbeknown to them, a secret White House cell - trying to prevent knowledge of Anderson's use of American weapons is trying to stop Cassandra from stopping the terrorists and identifying the origins of the anthrax.
Description copied from Goodreads.


I received a copy of "Tranquility Initiative" from the author for review through Bostick Communications.

Tranquility Initiative begins at an airbase in Turkey.  A young soldier, Billy Williams, recognizes bombs that are  loaded onto a plane as bombs for germ warfare.  He and Derek Kingsley are under orders to drop the bombs to end the war with Astrakhan.

This is the beginning of an intense and action packed book.  Two of the bombs did not make it onto the plane, they were stolen from the airbase and find their way into New York City.

I have to admit, I like conspiracy theory books.  The people in power will stop at nothing to stop the press from finding out that the United States broke treaty and used germ warfare.  The President, Charles Anderson, is running for re-election, and the men than are surrounding him belong to a secret society.

Meanwhile, the terrorists who have the two missing bombs are seeking revenge for the mass murders that occurred in their homeland by the war and then the anthrax.

Caught in the middle are Cassandra Williams and Senator Richland Powell, who are desperate to stop the senseless killing of more civilians.

This book is a race against time book.  The government trying to cover up, the terrorists trying to terrorize, and then those trying to stop the opposing sides.  It is the set up for a very good book.

I don't want to say too much about what happens, because I recommend that you read this book.  I gave it four stars.

Content warning:  graphic violence and profanity. Recommended to adults only.
Posted by Bookworm Lisa at 8:57 AM