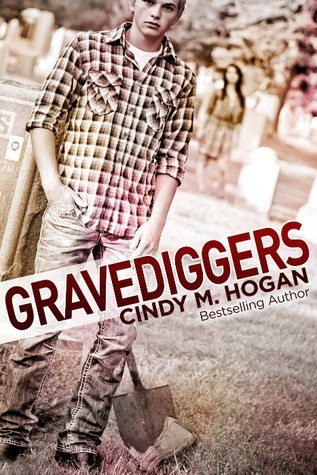 Gravediggers by Cindy M. Hogan
My rating: 4 of 5 stars
Source: Received to Review
Genre: YA Mystery/Suspense

Book Description:  Seventeen-year-old Billy thinks his father’s murder will never be solved — until he stumbles across an old ammo box while digging a grave in his small-town Tennessee cemetery.
What he finds leads him to question everything he knows, and his search for answers will uncover more than he bargained for: lies, secrets, and conspiracies — and behind them all, a dangerous truth.

My thoughts: Billy is seventeen and has unanswered questions from his father's death 10 year earlier. His goal is to become an FBI agent and solve the case, bringing justice for his father.

When he finds a ammo box full of jewels and cash while digging a grave his timetable to solve the case transforms. While investigating the case, he uncovers clues that put him in pursuit of the killer. He is joined by his best friend, Henry, and Henry's cousin visiting for the summer.

I enjoyed reading about the process of uncovering clues and eliminating useless information. Billy, Henry, and Amanda make a great team. For Billy's part, it doesn't hurt that Amanda is attractive and fun to be with. She's smart and helps turn the investigation in the right direction.

Billy learns about letting go of the past and what it truly means to love and forgive. He has faced countless trials because of his father's death. They have made him a stronger person, he now faces his biggest challenge.

The emotions that he goes through can be a little tough to read. His grief and longing for his father are understandable and relate-able. A strong part in the story for me is that he is a good kids. He is likable.

This book contains some violence at the end. I would caution readers who are sensitive to other's emotions in reading this book. Billy has an unchecked sense of vengeance at the end that is tough to read.

* Barnes & Noble * Book Depository
Posted by Bookworm Lisa at 3:30 AM