Q&A with Renee Reynolds ~ author of "Lord Love a Duke" 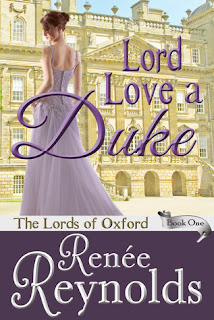 Jonas Leighton, Duke of Dorset, needs to find a husband for his spirited sister before she drives him insane. He hastily organizes a house party with a guest list that includes a wide-range of potential suitors, but unfortunately for the duke, his sister, Lady Miranda, has no desire to enter a union yet. Instead, her agenda for the dreaded party calls for the help of her closest friend, Lady Juliet Quinn, to thwart and confound her brother's plans by orchestrating a series of pranks meant to humiliate and confound him . . . if only he would cooperate and be the victim.Someone at the house party is in a marriage-minded way, despite his best intentions otherwise: the duke himself. He has secretly admired Lady Juliet for several years now, but she is off limits in many ways; not only is she friend to Miranda, she is also the sister of his close friend, Charles Quinn, Earl of Bristol. Perhaps the biggest obstacle is the tiny problem that Lady Juliet has vowed to avoid marriage, wanting no part of the typical unions of their set based on convenience, money, or titles and lands.With nothing at the party going according to anyone's carefully laid plans, and most of the guests participating in their own plots and schemes, the final prank yields even more surprises. Whatever is a duke to do?Lord Love a Duke is the first book in the Regency-based Lords of Oxford series, stories about the lives and loves of a group of five peers of the realm who met at university and formed a fast and lasting friendship.


Now it's time to hear from Renee!
**********************
1. Who are the author's who have influenced you the most?
It's almost a cliche to say her name now, but honestly, Jane Austen influenced me the most.  I love her dry wit and comfortable writing style.  Her humor ranges from self-deprecating comments to pointed set-downs.  And Austen's characters are just so richly varied:  intelligent and humorous Elizabeth Bennet, wounded and put-upon yet surprisingly resolved Anne Elliot, sincere but hopelessly awful matchmaker Emma.  She also worked - engaged in trade (the horror!) - and worked hard, making no excuses for her efforts to tell her stories and earn coin for it.

2. When did you realize that you wanted to be  a writer?
I've actually enjoyed writing since elementary school.  I was that weird student who loved taking an essay test.  A little over two years ago, my husband suggested I start a blog, so I decided to test the waters.  I picked one of my favorite phrases from Pride and Prejudice for its title: "obstinate headstrong girl."  A few months later I scribbled down outlines for a series of novels based on the friendship of five lords of the realm, and I've been writing ever since.  I even keep a pad of paper by my bed because I often wake up with chapter ideas swirling in my sleep-fogged brain.

3. If you could go anywhere to get away and relax, where would you go?
I should say something exotic and romantic like Fiji or Greece, but in truth I would love to rent a beach house at Galveston, Texas.  The West End of the island has no commercial development except for a mom and pop gas station/convenience store/bait shop.  We were blissfully alone with only the sounds of the Gulf and sea birds, and our own sighs of contentment.  Until the storm blew in.  We had to evacuate after three days since Hurricane Ike insisted on coming to the beach, too, but that's another story.

4. Is there any particular scene in the book that was influenced by an experience that you have had?
Coincidentally, I am also the daughter of a Marquis who found herself marrying a Duke . . . yeah, right.  I did loosely base the Duke's pursuit of Lady Juliet on my future-husband's "pursuit" of me; both Lady Juliet and I were surprised by our gentleman's attentions.  My husband and I started off as friends at college - I was actually dating his roommate when we first met.  That relationship did not last very long, and I found myself spending more and more time with this guy I thought of as just a friend.  One night, after attending a performance at the school of music, we were sitting on a bench in the commons area and he suddenly got this weird but serious look on his face, asking me "do you really not know?"  My reply of "know what?" caused him to laugh and lose his seriousness, and he walked me back to my room.  I was promptly pounced on by my suitemates for all the juicy details.  My details only caused looks of surprise and disbelief, with one friend bursting out, "you must be the only one on this campus that doesn't know how much this guy likes you!"  And so I was, but no longer.  The next morning at breakfast I saw this handsome, funny, smart, and talented guy through new eyes; we've been together ever since.

5.  Describe the part of publishing the book that brought a big smile to your face.
The first time I typed "Lord Love a Duke" in the search bar on Amazon and it pulled up my beautiful cover, I smiled from ear to ear.  It still makes me smile.  Every time.

6.What is one thing that you would like readers to know about you that is not in your bio?
I think I meet all the unwritten rules for being a romance author except for one: I don't own a cat.  I follow my favorite authors on Twitter and am friends with them on Facebook, and they all seem to have cats.  We're a multi-dog family.  Really, really large dogs.  Sturdy enough to saddle and ride kind of dogs.  So not only do I not have the requisite cat, I'm a bit afraid of the beasts and their all-knowing eyes.

Thanks Renee, it's great to know more about you and your book.  This looks like a very fun read to me.  I know that it is one that I have marked to read!    ~Lisa