Silence settled in the room as I thought through my options. Who was I kidding? I needed to be back in the hunt to be truly happy. I could rest once we found the final artifact.
“Okay.” I tucked the tickets back into the envelope. “I’ll do it.”
“You’ll go to Egypt?” he asked, clapping his hands together.
“I’ll go to Egypt.”
Amber and Trendon are on summer break and life seems like it’s finally back to normal. However, their vacation ends abruptly when a mysterious messenger summons them to Egypt. Dorothy and her team have found an ancient artifact, the final Weapon of Might, and they need Amber’s connection with the Shomehr to recover it.
The mission goes smoothly—until they obtain the artifact. Then everything goes wrong—very wrong. Friends become enemies, and enemies become allies. Now Amber and Trendon must race against time before the Weapons of Might are united and the Finisher’s Fury is unleashed.
This action-packed adventure from bestselling author Frank L. Cole promises entertainment, excitement, and enigma as it brings the Guardians series to an electrifying conclusion. 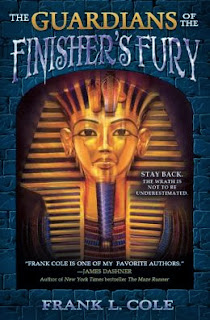 Dorothy squeezed the radio harder. “How much time do we have?”

"Dunno. I don't see anyone up ahead."

"Could they have gone elsewhere? Doubled back or walked past the opening?" Her voice sounded urgent, frightened.

“Are you coming here now?” She signaled to the others and the sound of arming weapons clattered throughout the cave.

“Yes. I should be there in the monastery in twenty, maybe thirty minutes, if nothing else goes wrong. But, boss, there’s something else.”

“What?” She checked the sight of her gun and clicked off the safety. I noticed Trendon eyeballing one of the spare guns lying on the ground next to the cots.

From somewhere out on the other end of the corridor, something growled. Everyone in the room spun around and aimed their weapons toward the opening of the cave.

My breath caught in my throat as the growl increased in volume and transformed into what could only be described as the sound of a woman howling in agony. A breeze blew through the opening carrying with it the musty scent of a wet animal. In an instant, all the lanterns in the room dimmed to where I could barely see in front of me.

I have had the opportunity to read the first two books in the series.  I found them to be great books.  To read my reviews, click on the titles below. 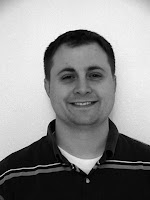 About Frank Cole: Frank L. Cole has lived in such exotic places as the Philippines and Kentucky, and currently lives with his wife and three children out west. While he strived for years to earn his publishing credits, Frank considers sharing his message of “Exercising Your Imagination” to over 45,000 kids across the country as his greatest accomplishment. The Guardians of the Finisher’s Fury is Frank’s seventh published book.
You can learn more about his writing at franklewiscole.blogspot.com.
Posted by Bookworm Lisa at 3:30 AM