Book Description:  In this eagerly anticipated companion novel to Royal Target and Royal Secrets, readers are invited back to the shimmering Mediterranean paradise of Meridia, where two royal weddings in a year are more than stressful—they’re deadly . . .
Lovely Meridian native Noelle Saldera yearns for adventure, but as the daughter of palace servants, working at Prince Stefano’s royal wedding may be as exciting as her life will get. But her options change drastically when she finds herself in the unlikely position of diffusing a bomb at the ceremony and being enlisted as the newest member of Meridian Intelligence—another wedding is in the works, and there can be no more close calls when Prince Stefano’s brother, Garrett, walks down the aisle. The bombing attempt at the first royal wedding leaves few clues as to the assailant’s identity. Desperate for answers, Meridian officials enlist CIA agent Jeremy Rogers to prevent a repeat occurrence at the upcoming nuptials. The beauty of the plan: the bride is Jeremy’s sister, so his cover is foolproof. What no one could anticipate is the instant connection between Jeremy and Noelle. Now, with their hearts on the line, the pair must work together to stop a seemingly unstoppable enemy before time runs out.


My thoughts: This is the third book featuring the Royals of Meridian. This is also the first book I have read in the series. I have purchased the kindle edition of Royal Target, but have not had the opportunity to read it yet. While I understood what was happening in this story, it would have been better for me to read the other books.

This book was full of suspense. Jeremy Rogers has been called to work on the attempted bombing of Prince Stefano's wedding. The attempt was thwarted by an alert by-stander. She becomes a central figure in spying on the staff to stop another attempt at Prince Garrett's wedding. At the beginning neither of them know that the other is working on the case, they know that they have chemistry together.

This book has some twists that kept me guessing. I really wanted to know who the bad guys are. I also enjoyed the way that Noelle and Jeremy got to know each other. There is an undeniable connection between them.

Traci Hunter Abramson does a wonderful job in the action/suspense genre. I have many of her books on my to-read list and I look forward to taking the time to do it.

This book has violence and kissing.  It is also written with characters who are members of The Church of Jesus Christ of Latter-Day Saints.  It has religious references but that was not one of the main points of the story. 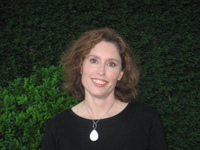 About the Author: (Taken from Deseret Book)  Originally from Arizona, TRACI HUNTER ABRAMSON spent much of her childhood exploring the little town of Pinewood. She is a graduate of Brigham Young University and a former employee of the Central Intelligence Agency. Since leaving the CIA, Traci has written multiple novels, including the Undercurrents trilogy, Royal Target, and the Saint Squad series. When she's not writing, Traci enjoys spending time with her husband and their four children. She also enjoys cooking, although she prefers an electric stove to the wood-burning variety.


a Rafflecopter giveaway
Posted by Bookworm Lisa at 5:00 AM