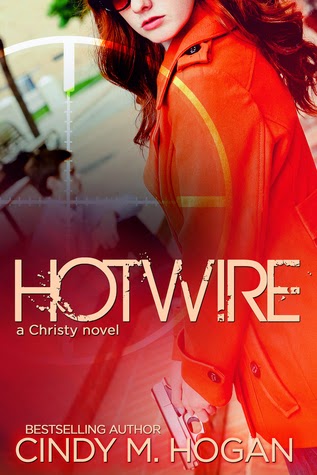 Division spy Christy Hadden can't wait for her latest assignment posing as a student at a prestigious New York City academy and car thief extraordinaire. The best part of the mission is her attractive handler, Jeremy, and her new team. The worst part? The sociopath masquerading as the academy's most popular guy. But soon she realizes the car thieves are much more than they seem. Her simple spying mission becomes more dangerous than anyone imagined. If the organization discovers her true identity, they won't hesitate to kill her, and if she fails, others will suffer the same fate. Young Adults, teens and adults will love this exciting suspenseful adventure with a dash of romance. You won't want to put it down

"It took me a second to realize it, but Kozlov was speaking in Russian. I flipped my head to Jericho. He clenched his jaw, and a vein pulsed on his temple. He had definitely understood Kozlov’s words. Did that mean that Jericho knew Russian? Did he have a Russian heritage? Were his parents Russian? Or had he been working for Alexander for a while and had taken Russian classes in order to fit in better? That made more sense to me. Besides, it seemed obvious, now that I knew him better, that he was involved with the bratva for the status, the power of it.

The fire in his eyes told me he would find a way to make me pay. Of that, I was sure

I thought Kozlov would leave now that he had laid down the law, but he didn’t. He stood there, waiting to watch Jericho succeed or fail.

I watched, despondent, as the kids we’d come to save were led away with the same hopeless acceptance they’d shown when we’d taken them out of the container in the first place. It broke my heart.

With military-like precision, Jericho ordered the rest of the guards to take up positions along the path to some container that would be our home for two weeks. I glanced at Jeremy. What was going to happen to us? Would Halluis and Ace be able to send someone? And even if they did, how would we be able to get to our would-be rescuers?"

Praise for Hotwire This book will take you on a crazy ride that you won't want to get off of to eat, sleep or anything else! ~Cathy Jeppson Hogan cleverly created characters with detail, who are both relatable and grounded. ~ the bookstalker It’s a thriller that reminded me of a mix between Gone in 60 Seconds and the Gallagher Girls books ~Canda Mortensen

Author Cindy M. Hogan Cindy M. Hogan graduated with a BA in education and is inspired by the unpredictable teenagers she teaches. More than anything she loves the time she has with her own teenage daughters and wishes she could freeze them at this fun age. If she's not reading or writing, you'll find her snuggled up with the love of her life watching a great movie or planning their next party. Most of all, she loves to laugh. She is the bestselling and award winning author of the Watched trilogy, a YA suspense series with a dash of romance. She has since branched off to write a mystery, Gravediggers, that won Best YA novel of 2013, a contemporary romance, Confessions of a 16-Year-Old Virgin Lips, and two in a spy series, Adrenaline Rush and Hotwire.

Blog Tour Giveaway $25 Amazon Gift Card or Paypal Cash Ends 12/26/14 Open only to those who can legally enter, receive and use an Amazon.com Gift Code or Paypal Cash. Winning Entry will be verified prior to prize being awarded. No purchase necessary. You must be 18 or older to enter or have your parent enter for you. The winner will be chosen by rafflecopter and announced here as well as emailed and will have 48 hours to respond or a new winner will be chosen. This giveaway is in no way associated with Facebook, Twitter, Rafflecopter or any other entity unless otherwise specified. The number of eligible entries received determines the odds of winning. Giveaway was organized by Kathy from I Am A Reader and sponsored by the author. VOID WHERE PROHIBITED BY LAW. a Rafflecopter giveaway
Posted by Bookworm Lisa at 4:15 AM