Book Spotlight ~ "Come Along With Me" by Linda Lee Schell 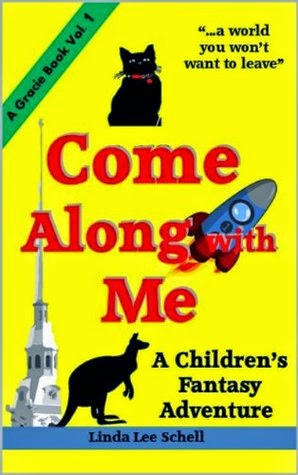 Come Along With Me will transport eight-to twelve-year old children, their parents, and their grandparents to another world when they read Come Along With Me, an adventure about friendship and caring, the unfortunate consequences of jealousy, and the power of hope.

Meet Gracie, a ditzy dwarf kangaroo from the thirty-sixth universe--a creature who lives in a perfect realm. Because she is bored, Gracie longs for an adventure to St. Petersburg, Russia, a place she imagines is filled with beauty and enchantment. Much to the tiny ’roo’s surprise, her ability to transport herself to the land of the czars has failed. She ends up at a dairy farm in St. Clair, Pennsylvania, where she saves the life of Gibson, an abandoned Maine coon cat.

The unlikely pair become fast friends. While Gracie tries to find her way back home, Gibson carves a life for himself on a farm with his newly adopted mistress, the farmer’s young daughter. There’s one hitch:  The overworked farmer demands that Gibson earn his keep. Gibson’s task is thwarted somewhat when he experiences strange visions. But are these visions the result of a thrashing he received from the farmer’s two dogs? Or, maybe Gibson sees parallel universes?

As outsiders the little kangaroo and the cat from the city negotiate the perils of farm life. They meet two malicious rats who hate anyone who is happy. The two devoted friends must contend with stampeding cows and a barnyard of critters that have little use for newcomers.

Will Gibson keep his sanity and become the little girl’s pet? Will Gracie ever see the splendor of the Russian Versailles? Will the farmer survive the evil machinations of the rats, Bratwold and Eastman? Drift back to the days of Barbie dolls, hula hoops, and Sputnik to find out.

Deep inside the thirty-sixth universe, just south of the Never-Ending Rainbow, millions
of shimmering spheres drift serenely through a tranquil sky. Gracie, a gentle soul, lives
on one of these spheres, located near the heart of not only one of the oldest, but quite
possibly the grandest of all the universes.

When the rays of the Everlasting Never-Ending Rainbow find their way to
Gracie’s sphere, rose petals in myriad shades of pink and red flutter playfully to the
ground. The creatures in Gracie’s world amicably take turns removing the petals from
their lawns and winding paths. Here, even the local version of “bad weather” (which is
always conveniently forecast well in advance by the Weather, Whether or Not creature),
rarely turns out to be anything more severe than a late afternoon breeze, producing much
rose-petal clutter, but little else. Undoubtedly, Gracie’s world is perfect in every way--
except for one small problem: Gracie is bored.

So, what’s a tiny kangaroo-like creature with large, almond-shaped, brown eyes to
do? Gracie patted her rotund tummy, wiggled her toes (that she hadn’t seen in years), and
decided that what she yearned for more than anything else was an adventure, an
adventure that would take her to a beautiful city full of history, drama, and most
importantly, new creatures. Yes! Something entirely different from what she had known
up till now. Wasn’t that the whole point of adventure? Not only something different, but
something to learn.

Watch an interview with Linda at:
http://youtu.be/Mhtd7J1oVao

About the Author:  Linda's favorite genre is fantasy/adventure, and her goal is to expand the imaginations of children while simultaneously exposing them to a variety of cultures and histories.
Combining childhood innocence with historical verisimilitude and a dash of magical fantasy--that was Linda's impulse behind writing her first book, Come Along With Me.Linda was born in Youngstown, Ohio and moved in 1977 to St. Clairsville, Ohio. Her husband of forty-four years and one son now live in Venice, Florida. Linda is the daughter of an Ohio dairy farmer and an elementary school teacher. Her working years were in a competitive sales and business environment.Active in Rotary and the Chamber of Commerce, she is a Paul Harris Fellow. Entering the work force at age sixteen Linda is now retired, and is seriously devoting her attention to writing children's books.