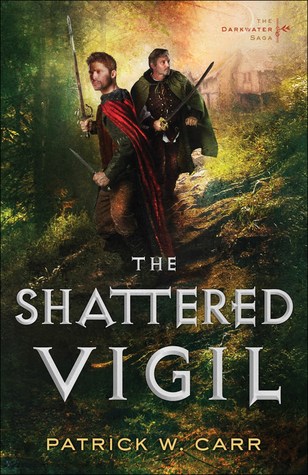 The Shattered Vigil by Patrick W. Carr
My rating: 4 of 5 stars
Source: Received from Bethany House to Review
Genre: Fantasy

Victory over the dark forces during the feast of Bas-solas should have guaranteed safety for the continent. Instead, Willet and the rest of the Vigil discover they've been outsmarted by those seeking to unleash the evil that inhabits the Darkwater. Jorgen, the member of the Vigil assigned to Frayel, has gone missing, and new attacks have struck at the six kingdoms' ability to defend themselves.

Just when the Vigil thought they had quenched the menace from their enemy in Collum, a new threat emerges: assassins hunting the Vigil, men and women who cannot be seen until it's too late. The orders of the church and the rulers of the kingdoms, fearing the loss of the Vigil's members altogether, have decided to take them into protective custody to safeguard their gift. On Pellin's orders, the Vigil scatters, leaving Willet to be taken prisoner by the church in Bunard.
In the midst of this, Willet learns of the murder of an obscure nobleman's daughter by one of the unseen assassins. Now he must escape his imprisonment and brave the wrath of the church to find the killer in order to turn back this latest threat to the northern continent.


My thoughts: When you think that things are going well for Will Dura, chaos erupts!

This is the second book in the Darkwater Saga. Will and the other members of the Vigil defeated the evil of the Darkwater in the first book. They did not know that the evil is spreading and the enemy is taking a new approach to corrupt society.

In order to fully grasp this book, you really need to read The Shock of Night first. The plot of this fantasy is complex. There are many people involved. The Vigil is a complex group that has religious origins. They have "gift" to sort through memories and determine a person's innocence or guilt. They can also exact justice.

The Darkwater is a forest where evil lurks. It alters minds and changes personalities. The Vigil has tries to keep people from the forest, but there are ways to entice people to enter. The way that Patrick W Carr writes his story is enticing. I could see both sides of the coin and have empathy for characters that I normally would not. He uses the most unlikely heroes who step up and do amazing things. I have enjoyed every book he has written (yes, I have read them all.)

If you are a fantasy lover and love an epic tale you should read this saga. It has violence. The people are evil and there are uncomfortable things done to good people. There is mention of rape, but it is not descriptive.  There will be another book!