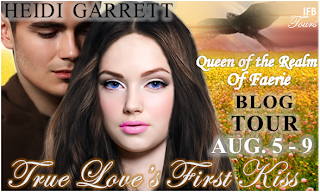 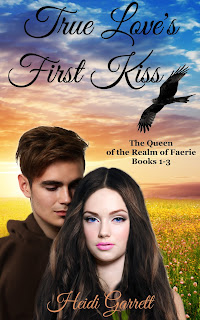 In the Enchanted World, true love’s first kiss is magic.

Nandana’s Mark, Book 1: When two half-faeries—Melia and her younger sister—are cursed under dreadful circumstances, true love’s first kiss is the remedy.
The Flower of Isbelline, Book 2: Nothing but true love’s first kiss can save Melia’s younger sister from blind ambition and ruin.
The Dragon Carnivale, Book 3: Melia must choose the freedom she cherishes or true love’s first kiss—and a relationship that promises to secure her place in the Whole.
The Queen of the Realm of Faerie is a fantasy fairy tale series that bridges the Mortal and Enchanted worlds. The main character, Melia, is an eighteen-year-old half-faerie, half-mortal. She lives in Illialei, a country in the Enchanted World, with her two sisters and their mother. Melia’s father has been exiled to the Mortal World, and her best friend is a pixie.
When the story opens in the first book, Melia is troubled by her dark moon visions, gossip she overhears about her parents at the local market, and the trauma of living among full-blooded faeries with wings—she doesn’t have any.
As the series unfolds, the historic and mystical forces that shape Melia’s life are revealed. Each step of her journey—to find the place where she belongs—alters her perceptions about herself, deepens her relationships with others, and enlarges her world view.
True Love’s First Kiss is a compilation of the first three books in this ongoing series.

My thoughts on the series:  I was very excited to read this book.  I have worked with Heidi in the past on doing promotional posts for her book and found her to be easy to work with and nice a nice person.  She even sent a paperback copy of the book when requested.

The first thing that surprised me was the size of the volume.  I reminded myself that it is three smaller novels put into one book.  I admit that I often think of bigger as better.  I sometimes itch to get my hands on a book that I know will have more substance than some of the small books.  Thick books are my favorite to read when I'm not facing a deadline.

As soon as I could with my review schedule, I dove into the book.  I knew that I would not be able to complete it before the time of this post, and I was right.  I will say that I am loving it.  It took me a bit to get familiar with the terminology.  That's normal with fantasy books.  It didn't take long to get all the people, races, and places set in my mind.

I had to keep reminding myself that this book is self-published.  I think that this book is as good as many of the books I have read that are put out by the large publishing companies. She does a great job at setting the scene and following through with her plot that makes it a book that is easy to comprehend and keep up with.

The story follows sisters.  They are the daughters of a fairy and a mortal.  They try to talk their druid father out of bringing an evil being out of the inbetween where he has been building as a consciousness.  There father believes that once Umbra is brought into a vessel that he will right many of the wrongs the fay have perpetrated.  While trying to reason with him, they accidentally kill him, making an even bigger problem than they had to begin with.

Their mother curses the sisters.  The only way to break the curse is by "true loves first kiss".  Unfortunately for them, there are many who would use them to accomplish their different agenda's.

Melia is the middle sister, and the one that the story follows  from her perspective.  I personally love the fact that the main heroine is not perfect.  She has insecurities and doubts.  She also stutters.  The overlooked sister becomes the hero.

As I stated earlier, I have not finished the book, but I intend to.  This is too good to set aside.  I really want to know how she will continue the story and I hope that the sisters will find their "happily ever after". I will rate the book as a whole when I have completed it, my full review of the book will be posted on Goodreads and Amazon.  I may even put it here. :) 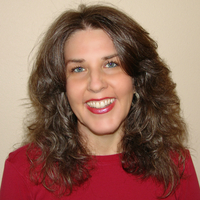 About Heidi: Heidi Garrett is the author of The Queen of the Realm of Faerie series. Her personal message to all her readers is:
Once upon a time, you lived in an enchanted world, too…
May you always see the magic in your life.
The Queen of the Realm of Faerie includes many strong female characters within an intricate fantasy land. It is also a fairy tale fantasy.
The first book, Nandana’s Mark, is one of those free ebooks; the second book, The Flower of Isbelline, is now available; and the third book, The Dragon Carnivale, will be released in June 2013.
Heidi's hope is that when you read her books, you will rediscover the enchantment in your own life.
She currently resides in Eastern Washington State with her husband and their two cats. So far, she loves the snow. Being from the South, she finds it very magical.

Heidi is offering a giveaway with this tour.  Use the rafflecopter form to enter.
a Rafflecopter giveaway


If you are interested in taking the books one at a time.  Here are their covers and links to Amazon.  Clicking on the cover will take you to the books Goodreads page.