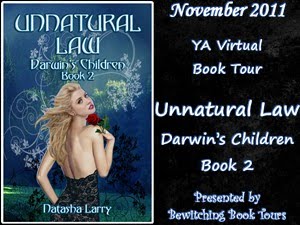 My rating: 3.5 of 5 stars
Source: Received to review for the blog tour
Genre: Paranormal/Fantasy YA

Description from Goodreads: Life can get pretty complicated for any seventeen-year-old girl, but for a home-schooled telepathic black girl trying to survive in a prestigious private school in small-town Jonesborough, Tennessee, it can be maddening; especially when her telepathic father keeps eavesdropping on her thoughts!
Jaycie Lerner's family isn't the usual mom-dad-kid setup. Jaycie's mom is MIA, but Allison, her personal live-in trainer, is more than a mom, with her own special abilities, like being able to lift cars and run incredibly fast. And Jaycie's godfather John is more than persuasive; he can literally convince anyone to do anything.As far as the rest of the world's concerned, Jaycie's on the outside looking in. The townsfolk love Jaycie's paediatrician father, but she doesn't fit in with "normal" kids, and she doesn't really want to. Most of her free time is spent training to keep her telekinetic and telepathic powers under control. But there's one thing she can't control; and that's her feelings, especially when her best friend Matt is nearby. If only he knew what she was truly capable of...Everything seems to be status quo for Jaycie until she receives a cryptic message from a stranger and meets a very unusual girl new to Jonesborough. Then all hell breaks loose.

My thoughts: This is a very interesting and creative book. It deals with paranormal traits that a few humans have evolved to balance the world from evil.

Jaycie is seventeen and dealing with her skill at telepathy and telekinesis. She is trying to fit into a private school where she has always been home schooled. She is a loner, she doesn't have many friends. Her powers make it difficult to blend when she can hear unwanted thoughts. She's falling in love with her best friend, Matt. Life is tough. Unfortunately, it can get worse.

She is visited by a guardian angel who tells her to take a job to get to know another girl working in the Christian Bookstore. Haylee is also a loner. She is dealing with abusive parents and struggling to find a place for herself and dealing with superhuman powers that she doesn't understand.

I enjoyed this story. Natasha Larry writes with a distinct voice that is intriguing and easy to follow. My only warning would be that this book contains scenes that are graphic in nature of abuse and violence. I would only recommend to a more mature YA reader.

Darwin's Children is book one.  The second book looks very interesting and I plan to read it.  Here is the info on the second book. 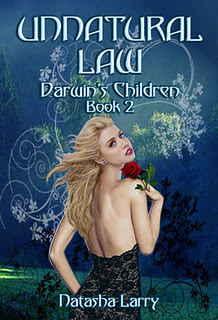 by Natasha Larry
Fantasy / Young-Adult
Book 2 Darwin’s Children Series
Seventeen-year-old Jaycie Lerner’s psycho-kinetic power surge is over, and her astounding powers are under control for the time being – sort of. As she struggles to maintain her humanity in the face of the awesome terror and responsibility of her abilities, she also yearns for the chance at a normal life – and a relationship with Matt Carter, the best friend she had to leave behind. But Matt’s got a few tricks up his sleeve, and he’s not about to give up on his feelings for Jaycie.
As Jaycie and her family grapple with the day-to-day routine of trying to keep their world together, Jaycie’s mother figure, Allison Young, endures a personal crisis of her own. The superhuman blonde possesses the physical equivalent of Jaycie’s awesome psychic power.
So evolved, at ninety-two she still looks twenty. But what good is extended life when everyone else around her is so fragile? With no one to share her unusual life, she’s a uniquely lonely woman yearning for the romantic love she sees all around her. But in a dream she gets her wish – and it quickly turns to a nightmare for everyone else in her life. The memory of a rose is all she can hold onto in the storm of obsession that nearly sweeps her away.
Things quickly turn deadly for the vampires, but the Dey-Vah Guard fairies refuse to acknowledge there’s an imbalance in the nature they protect. As the danger gets ever closer to Jaycie and her family, the race is on to find answers before a secret plot can destroy them all.
About Natasha Larry:

Natasha Larry resides in Huntsville, Alabama with her daughter and fiancé. She graduated from Tusculum College with a B.A. in History and is currently working on getting her certificate in education. Apart from writing, she is a self-proclaimed comic book nerd and urban fantasy junkie. Her poetry and short fiction has appeared in publications such as Writing Edge magazine and Escaping Elsewhere. Darwin’s Children is her first work of novel length fiction.
Author Web Site:
http://www.paranormalwire.blogspot.com
http://natashalarrybooks.com/
Books by Natasha Larry
Darwin's Children ( Book 1 of Series: Darwin's Children )
Unnatural Law Book 2 Darwin’s Children Series
Facebook: https://www.facebook.com/pages/Darwins-Children-Series/145755472156223
Twitter: @natashalarry
e-mail: Natasha@natashalarrybooks.com