The Nine Lives of Christmas by Sheila Roberts

My rating: 4 of 5 stars
Source: Received to review for this blog tour
Genre: Contemporary Adult Romance
Rating: PG-13 for content

Description from Goodreads: When a guy is in trouble, he starts making deals with his Creator…and Ambrose the cat is no exception. In danger of losing his ninth and final life, Ambrose makes a desperate plea.  He’ll do anything—anything!—if he can just survive and enjoy a nice long, final life. His prayer is answered when a stranger comes along and saves him, and now it looks like he has to hold up his end of the bargain.

The stranger turns out to be a fire fighter named Zach, the quintessential commitment- phobe who’s in need of some serious romantic help. If Ambrose can just bring Zach together with Merilee, the nice lady who works at Pet Palace, it’s bound to earn him a healthy ninth life.  Unfortunately for Ambrose, his mission is a lot harder than he ever anticipated.  Now it’s going to take all his feline wiles—and a healthy dose of Christmas magic—to bring them all together in time for the holidays.

My thoughts: Ambrose the cat has a problem. He is on his ninth life and a big dog is about to have him for dinner. He starts to make bargain with his maker when he is saved by a jogger. Of course, he is a cat and thinks that he will walk away with business as usual when a little voice inside his head reminds him of his promise to be a better cat. So, he follows the jogger home and decides that he will live with him and help him out.

It's hard to claim squatters rights when the owner of the home isn't sure that he wants the responsibility of a cat, but Ambrose is persistent. First order of business is to get rid of the horrible girlfriend. While he can understand why his owner would want a relationship, he can't figure out how such a nice guy could end up with the woman who snuffed out one of his lives.

He instantly loves Merilee, the nice woman who helps them at the pet store. He remembers her from one of his past lives when she tried to help him at the animal shelter. His goal is to get the nice guy together with the nice girl, that would be payment for saving his life and get him a nice ninth life.

This is a very cute romance story, perfect for a nice night in front of the fire celebrating the holiday season.

I just happen to be giving away an audio copy of this book right now until November 27th for the Gratitude Giveaway Hop.  Make sure that you enter. :)


Writing since 1989, Sheila Roberts has had 26 books published, both fiction and nonfiction, under different names. Her books have been chosen for book clubs, Readers Digest Condensed books, and her popular novel ON STRIKE FOR CHRISTMAS was made into a movie and appeared on the Lifetime Movie Network. Her novel ANGEL LANE was named one of Amazon’s Top Ten Romances for 2009. 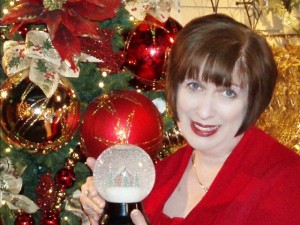 However, before she settled into her writing career, she did lots of other things, including owning a singing telegram company and playing in a band.  Writing and helping others to find ways to better themselves are her greatest passions and her popular newsletter SUPER YOU, is dedicated to helping women improve their lives.
When she’s not making public appearances or playing with her friends, she can be found writing about those things near and dear to women’s hearts: family, friends, and chocolate. Drop in for a visit at her website: http://www.sheilasplace.com or connect with her at Facebook athttp://www.facebook.com/reqs.php#!/pages/Sheila-Roberts/76502579853?ref=ts and Twitter athttp://twitter.com/#!/_Sheila_Roberts.
Her latest book is the women’s fiction novel, The Nine Lives of Christmas (St. Martin’s Press).
Sheila Roberts lives in the Pacific Northwest. She’s happily married and has three children.