Bending The Boyne: A Novel of Ancient Ireland ~ Blog Tour 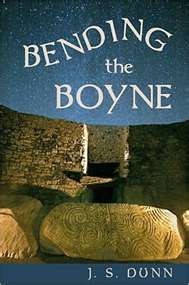 Description from Goodreads: 2200 BCE: Marauders invade ancient Eire seeking copper and gold. The astronomer Boann and the enigmatic Cian must use all their wits and courage to save their people, the peaceful starwatchers, from the invaders' long bronze knives and scavenging ways. Tensions between new and old cultures and between Boann, Elcmar, and her son Aengus, ultimately explode. What emerges from the rubble of battle is a fresh take on Ireland's oldest legends.

BENDING THE BOYNE draws on 21st century archaeology to show the lasting impact when early metal mining and trade take hold along north Atlantic coasts. Carved megaliths and stunning gold artifacts, from the Pyrenees up to the Boyne, come to life in this researched historical fiction.
My thoughts:  I am very impressed with the work that went into this book.  It is about ancient inhabitants of Ireland.  This group of people were starwatchers and studied the heavens.  They carved the cycles of the solar system and season into rock and temples.  They were a peaceful people,


They must deal with Invaders from the sea who come to plunder the metal resources and leave destruction in their quest for precious metals.  The Invaders take natural resources from the starwatchers without a care to trade or whether or not it takes the food that they needed for the winter season.  The detail that J.S. Dunn explains the process of the early miners and the refining process of copper is very interesting.  You can tell that he did meticulous research on the Bronze Age.  In his Biography at the back of the book it states that he has a keen interest in the early Bronze Age Culture.  It also indicates that he researched and made friends in the fields of "archaeology, geology, and Bronze Age tool-making."


Boann is learning of the heavens from her father, his apprentice, Cian, has left the community to dwell with the invaders.  She is planning on taking her father's place when he passes and carving the history of the stars into stone.  It is a very meticulous and exact trade.  She is placed in a position to keep peace between her people and the Invaders by marrying their chief.


Cian watches and learns from them.  He then is placed into a position where he can help his people by learning from the enemy and knowing how they work.


This historical fiction novel is well thought out and very interesting.  I personally love to find out about ancient cultures.  I was unfamiliar with the people of the Boyne.  They have left amazing mounds as a tribute to their culture that predated Stonehenge.  If you love historic fiction and ancient civilizations then I highly recommend this book to you.

Excerpt taken  from PUMP UP YOU BOOK's Promotion Page:
After he took a ritual sweatbath, the elders introduced him to Basajuan. The man stood like a bull with an incongruous broad smile.
Cian turned over the agreed weight of gold. Basajuan labored at hammering the gold into a wide flat sheet, Cian working nearby to make a new curved anvil. The great smith wanted the anvil for just this project. Cian chipped and polished small stones into rectangles which Basajuan used to smooth the sheet gold into final shape.

At the anvil, the smith fashioned a cape of gold. It spanned the chest and over each shoulder and upper arm, with its opening at the back of the neck. Basajuan bent over the anvil to finish the exceptional cape, embossing tightly spaced curving ribs alternating with curving rows of tiny raised bosses, until the gold appeared to be a flow of luminous textile and beads folding around the lucky wearer. Its underside, he would finish with reinforcing leather held with bronze strips.
This flowing gold cape astounded all who saw it; it was an unprecedented object.
“Who shall receive this cape?” Cian inquired as the smith tapped the final rows of dazzling embossed beading into the gold’s arcing surface.
“This? This cape of mine is going to Taranis, the chief trader at a great estuary north of here.” The master ran his hands over his delicate work. “I shall never see it again.” He stared with Cian at the gold treasure that would travel far away from his talented hands.
“Will this chief know where it is that you Basques obtained the gold for it?”
Basajaun considered this, wiping his brow. “What do you suggest?”
“Let Taranis hear that this gold came from the Starwatchers. Nothing more.”
Basajuan agreed with a wink.

Visit the Facebook page:
http://www.facebook.com/pages/Bending-The-Boyne/192198197473429
There is a giveaway for this book happening at Goodreads right now.  Go to this link, and enter. It runs until December 3rd.
Posted by Bookworm Lisa at 4:00 AM