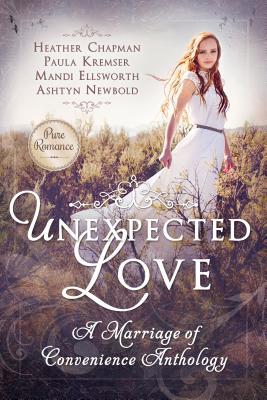 Book Description:  Around the turn of the century, matches were made for all sorts of reasons--whether to keep a family together or simply to make ends meet. But love has a way of turning up in the most unexpected places! With four historical romance stories in one, this fun anthology will sweep you from the dance floors of aristocracy to the hearths of country living, leading to love through the most unusual circumstances.
Ashbrook Abbey by Heather ChapmanThough decidedly against marriage, when Ambrose Notley discovers it may win him his uncle's good opinion (and his inheritance), he marries the orphaned Kate Mowbray. But will Kate be able to break down the walls that Ambrose has built around himself?First Comes Marriage by Paula KremserWhen Letty's sister and husband unexpectedly die, a greedy uncle threatens to steal custody of the children and their money. David, Letty's brother-in-law, marries Letty in the hopes of retaining custody of their niece and nephew. But will this love for show become something deeper?The Price of Her Heart by Mandi EllsworthWhen Faith McKinney witnesses a crime she shouldn't have seen, she's forced into hiding to protect her own life.As part of this, her uncle arranges her marriage to small-town sheriff Geoffrey. But when the men searching for her find Geoffrey as well, will he be able to protect her?Beauty and the Beholder by Ashtyn NewboldWhen a marriage arranged by chance brings Fanny and Percy together, they quickly learn that clashing personalities and battles of wit are not a recipe for a happy match. How could a marriage between quick enemies ever result in something such as love? But fate has a way of bringing even the most unlikely hearts together...


My thoughts: Desperate circumstances sometimes call for desperate measures....like a marriage of convenience. I admit that I love stories where two unlikely people come together and find happiness. In this case, there are eight, because the book contains four stories.

Usually short stories are not my preferred reading material because I like a story with character development and I become invested in the characters. I have recently read several anthologies and when they are well written, they are a lot of fun. This anthology falls into the well written category. I also loved the unique voice of the writers. While all of the books share a theme, they are very different. I highly recommend all four of the stories.

Heather Chapman: Being the youngest of four sisters (and one very tolerant older brother), Heather grew up on a steady diet of chocolate, Jane Austen, Anne of Green Gables, Audrey Hepburn, and the other staples of female literature and moviedom. These stories inspired Heather, and she began writing at a young age. After meeting and marrying her husband Mark, Heather graduated magna cum laude from Brigham Young University and settled down in a small farming community with her husband and four children. In her spare time, Heather enjoys volleyball, piano, the outdoors, and just about anything creative.
Mandi Ellsworth: Mandi is an avid reader, a slow jogger, and disinterested in board games of any kind. She lives in Utah with her husband, three children and no pets.
Paula Kremser: Paula Kremser focused on a career in science for a few years after graduating from Brigham Young University. Several years later when she moved with her young family to England, Paula seized the opportunity to focus on her love of the Regency Era. The enchantment of the aristocracy and the fascinating stories from every stately home she visits have been both research and inspiration for her first novel, “Sophia,” and second, “To Suit a Suitor.”
Ashtyn Newbold: Ashtyn Newbold discovered a love of writing early in high school. Inspired by regency period romance, she wrote her first novel at the age of sixteen. Because she can’t vacation in her favorite historical time periods, she writes about them instead. When not crafting handsome historical heroes, she enjoys baking, sewing, music, and spoiling her dog. She dreams of traveling to England and Ireland. Ashtyn is currently studying English and creative writing at Utah Valley University. She lives in Lehi, Utah with her family and is the author of “Mischief and Manors.”