Infectious by Elizabeth Forkey is on tour! Get your #FREE copy today!

"It's all about blood, Ivy. It always has been." 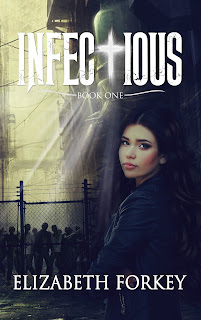 I've known something was wrong. I've sensed but avoided the truth that I was slipping. You'd think if you recognized that you were dying that you'd hurry to stop it, to heal whatever is sick. It's innately human to struggle for life. But for some reason, though it makes no sense, it's also innately human to lean away from eternal life.

Six years ago, when millions of people disappeared from the face of the earth in a silent instant, all hell broke loose. People did what you'd expect: they panicked. We've been programmed with the will to survive—to care for our loved ones at any cost. Husbands became murderers. Children became thieves. The world turned upside-down and survival was all anyone could think about. That was before we knew about the disease.

INFEC†IOUS, the first novel in The INFEC†IOUS Series is a post-apocalyptic love story. Young Ivy has a killer sense of humor, wit and a personal relationship with the Curse Giver. Ivy longs for freedom from her overbearing spinster Aunt and from Toccoa's protective fences. A trip outside the compound brings confusion, danger, romance and death into her already troubled life. Two different guys--polar-opposites--are vying for her heart. Ivy is desperate to hold onto The Cure in the midst of the chaos and heartache. INFEC†IOUS is a love story that will ravage your heart and leave you hungry for more.

Enter to win a copy at ENTRADA.

A standard Taser is fired from a distance. Our devices have been modified for close proximity. They can drop an attacker by pressing the electrically charged prongs directly into the skin. Almost like a short, electrically charged cattle prod. I feel a small tingle of electricity run through me, but my attacker's arms slacken as the full current paralyzes him. One shock won't slow him down for long; but I hear Aunty press the trigger several more times, rendering him limp and convulsing against the back of my seat. He's still conscious and the paralyzing effect of the shocks will only last about a minute. I'm confused and terrified when Aunty starts the car and guns it towards the highway with the reeking man still behind my seat.
"What are you doing?" I scream. "We have to get him out of here! Stop the car!"
My voice is high-pitched and weak; I can't seem to catch my breath. I feel like his arms are still around my neck, strangling me. Is this called hyperventilating? I want to fill my lungs, but they seem to be working against me! I pant, pulling tiny scraps of air into my desperate lungs. My eyes are starting to blur!
"It's a trap." Aunty's voice is flat and calm. "There are at least two of them, Ivy."
Just as unexpected as her sudden burst of speed had been, she stomps the brake; throwing me forward into the dash board. My head hits the windshield and my elbows rake against the vents on top of the dash. I slump back, dazed.
"Sorry," she says as she thrusts the SUV into park and realizes too late that she could've warned me.
This last jolt scared the wind back into me. My lungs are burning, but they are functioning again. I blink little floating lights out of my returning vision. We've only gone about a quarter of a mile, just to where the parking lot meets the highway, but Aunty is hoping it's enough distance between us and whoever was helping our attacker. She is already out of the car and coming around to the passenger-side back door.
Shaking myself free of the shock I feel - both from the predicament we are in and the hard knock I took against the windshield - I climb into the back seat to push the man out as she pulls from the other side. The zombie is slumped against the back of my seat. He is wearing a silver suit and a green, plastic Oscar the Grouch mask. His greasy black hair hangs out in dirty strands from under his mask. Before we dare to touch him, Aunty gives him one more long burst from her Taser. As we struggle to tug the moaning, convulsing monster from the tall SUV, his Oscar the Grouch mask slides to one side revealing his deformities.
His ear is rotten with almost no flesh left. His exposed cheek is covered in strange lumps of red skin and yellow sores. Near his lips there is a gaping hole, revealing what's left of his stained brown teeth. I shudder at the sight of him. He's one of the worst I've seen and this is the closest I've been to one of them for years. His odor is revolting.
Me pushing and Aunty pulling, we dump the sick man on his head in the middle of the road. Jumping back in the passenger side back door, I check the back hatch area to be sure no one else is hiding in our car. I see only our new clothes; the once neat piles toppled over from Aunty's race car driving. I climb up front and, in the rearview mirror on the passenger side, I see Aunty still bending over the man in the street.
What is she doing!
I open my door to see if she needs me; but she is finally making her way back around to her door. A second later, she climbs into the car and I lock the doors even before she slams hers shut. She hits the lock button again for good measure, and then we peel out. I don't think Aunty meant to make so much noise as she hit the gas pedal too hard, spinning the tires before they found purchase, lunging us forward. I feel whiplashed in every sense of the word. I struggle with just trying to breathe. To focus. To grasp what just happened. My muscles are still tense with adrenaline and I'm shaking.
We are okay, I try to convince myself. 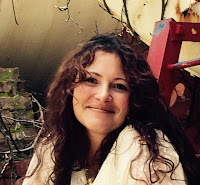 About the Author: Elizabeth Forkey is a Christian blogger, novelist, and an award-winning creative writing teacher (she has a keychain to prove it!). Her debut novel INFEC†IOUS is a Christian Post-apocalyptic Zombie Love Story and is the first book in The INFEC†IOUS Series.

The next book in the series, IMMACULA†E is available now; and, the final installment, IMMANEN†, is expected to hit the shelves Spring of 2016. Elizabeth is also an award-winning sugar artist and cake sculptor and the mother of two very adorable, outspoken daughters.