Now on DVD ~ Saints and Soldiers: The Void + giveaway! 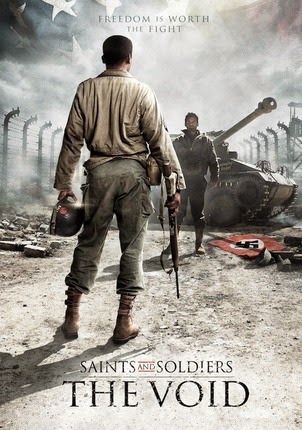 I was fortunate to attend a screening for Saints and Soldiers: The Void at the end of July.  If you missed my review - I loved it!  In fact I am reposting the review below.

Saints and Soldiers: The Void it out on DVD today.  Deseret Book is kindly offering a copy of the DVD to one winner on this blog.  There will be a giveaway posted at the bottom.  Be sure to enter.  Of course, I am adding purchase links if you want to get your hands on a copy right away.


Movie Synopsis:  Germany, May 1945, the twilight of WWII. On a final mission deep in the Harz mountains a U.S. tank crew discovers a platoon of Germans, including three infamous Panzer tanks, preparing to ambush allied supply trucks.

Before the war, Sergeant Jesse Owens, was a product of segregation and racial discrimination. Forced by law to ride in the back of the bus and disenfranchised from the political process. As the Germans bear down on the Americans, Owens fights the Axis powers for a freedom he and his fellow African American soldiers have never felt.
With a deadly game of cat and mouse quickly unfolding, Owens and his predominantly white tank crew find themselves out-gunned and out-manned by the German Panzer tanks. Several in Owens’ crew are reluctant to put their faith in a black tank driver despite their dire circumstances. With tension and fear beginning to manifest Owens knows they must put aside their differences to stop the enemy from their deadly plan. Knowing that a victory over the Nazis means a victory for racial justice, Owens and his men find a way to work together to save hundreds of lives in a desperate battle against the greatest odds they have ever faced.
On July 31st I had the opportunity to see a screening for Saints and Soldiers: The Void.  It was an amazing opportunity!  I am grateful that I didn't miss it and that Deseret Book sent me an invitation.
This is a movie that will always be good no matter where you see it; but seeing it on a big screen added a layer of excitement.  I saw this film at the Megaplex Theater at Thanksgiving Point, located in Lehi, Utah.  One of the bonuses of attending the screening was the Q& A with the movie's producer, director, and five of the actors.
This movie takes a non-traditional look at WWII.  The difference is the concept of the plot.  The movie deals with bigotry.  The bigotry was the way African Americans were viewed and treated by the Caucasian population.  It is a very sensitive matter that was dealt with  head on.  It was quite the experience to see the movie from the viewpoint of Sergeant Jesse Owens.  The actor playing Owens, Danor Gerald, did a wonderful job.  In the Q&A after he said that he would wait until the rest of the cast and crew had eaten before he would go get some food.  It was similar to the treatment blacks would have received during the time period.

The story made me think about the different battlefronts that African American soldiers were involved in.  They had the "opportunity" to fight for a country that didn't acknowledge their worth as people. Even though Sergeant Owen's was mistreated, he still did his best. He went out of his way to save lives.

The movie is based on interviews with men who served during WWII.  It was a fun bit of information to find out that one of the tanks in the movie was the original used by one of the men interviewed.  The director, Ryan Little, stated that the series of movies is when a moment of humanity is discovered in war.  There were several of those moments in this film.

Enter to win a copy!  This is a US only giveaway.
Contest ends on October 22nd.
Prize is provided by Deseret Book, they will ship it to the winner after I let them know who the lucky person is.

Terms and conditions are to the right and in the bottom of the form.
Posted by Bookworm Lisa at 3:30 AM