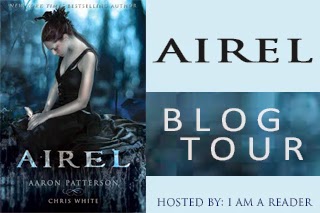 Book Description:  Airel: The Awakening is a young adult paranormal romance about the angel Kreios who falls so deeply in love with a woman that he chooses to fall from heaven to be with her. She gives birth to a daughter in Arabia, 1250BC. The girl is pursued ferociously, relentlessly by an enemy in the deepest darkness.   In present day, Boise, Idaho is just a girl: Airel. She's just your average high school student...who turns out to be anything but average. It's because of who she is, because of her ancestry, because of her lineage. Past and present collide as what has been twisted comes dangerously unraveled.


My thoughts:  Airel would technically be classified as a YA book because one of the main characters is seventeen years old. But, there is another story going on unfolding in the pages of this book about Kreios. This is more of an adult story. I would say that this is a book that can be enjoyed by all ages.

Airel is a young woman who's life begins to change when a really cute boy moves into the school and her body begins to undergo changes that are abnormal. Then to top off everything she witnesses a murder and then she is stalked by the killer. She begins to fall into the obsessive love pattern that we see in so many YA novels and learn about who she is and her role in the universe at the same time.

Kreios is a fallen angel. His story is told about his fall and the woman he loved. The child that they had and then the war to stop the evil from spreading and killing the rest of the fallen angels and his daughter.

Somewhere in the middle the two stories merge and the destinies of Kreios and Airel collide and become one. Airel learns what the true meaning of love is, and to be able to truly love she must be whole and healthy emotionally.

I found the beginning of Airel's story to be predictable. I was pleased that the author's turned the story around. Definitely worth taking the time to read this story.

Aaron Patterson is a NEW YORK TIMES and USA TODAY bestselling author of over a dozen novels. He writes hard-boiled thrillers and young adult fantasy. He was home-schooled and grew up in the west. Aaron loved to read as a small child and would often be found behind a book, reading one to three a day on average. This love drove him to want to write, but he never thought he had the talent. He wrote Sweet Dreams, the first book in the WJA series, in 2008. Airel is his first teen series, and plans for more are in the works. He lives in Boise, Idaho with his family.

Chris White is an award-winning author and editor, and is co-author of the Airel Saga with Aaron Patterson. Chris also writes psychological thrillers under the nom de plume Jet Deaver, and has penned some short stories as C.P. White. He blogs occasionally about writing and the journey of the Christian artist at C.P. White Media Blog and lives in Idaho with his family.

Praise for the Book “This is not your typical fallen angel story. It is one that has left me breathlessly waiting for the next one in the series.” --Sandra Stiles, Amazon review
“A beautifully written and crafted fiction about teenage innocence, faith, loss and love. A must read for teens and adults alike." --Vincent Zandri, International Bestselling Author of The Remains, The Innocent, and Concrete Pearl
“This was such a unique twist to the common way angels are portrayed…. The struggle between good and evil is the forefront of this great story!” – Courtney, Amazon review


Blog Tour Giveaway $25 Amazon Gift Card or Paypal Cash Ends 6/16/19 Open only to those who can legally enter, receive and use an Amazon.com Gift Code or Paypal Cash. Winning Entry will be verified prior to prize being awarded. No purchase necessary. You must be 18 or older to enter or have your parent enter for you. The winner will be chosen by rafflecopter and announced here as well as emailed and will have 48 hours to respond or a new winner will be chosen. This giveaway is in no way associated with Facebook, Twitter, Rafflecopter or any other entity unless otherwise specified. The number of eligible entries received determines the odds of winning. Giveaway was organized by Kathy from I Am A Reader and sponsored by the author. VOID WHERE PROHIBITED BY LAW.  a Rafflecopter giveaway
Posted by Bookworm Lisa at 4:00 AM