The Captain's Daughter by Jennifer Delamere 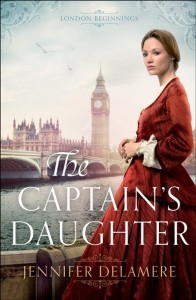 The Captain's Daughter by Jennifer Delamere
My rating: 4 of 5 stars
Source: Received from the publisher to review.
Genre: Victorian England Romance

Book Description:  When a series of circumstances beyond her control leave Rosalyn Bernay alone and penniless in London, she chances upon a job backstage at a theater which is presenting the most popular show in London. A talented musician and singer, she feels immediately at home and soon becomes enthralled with the idea of pursuing a career on the stage.
An injury during a skirmish in India has forced Nate Moran out of the army until he recovers. Filling his time at a stable of horses for hire in London, he has also spent the past two months working nights as a stagehand, filling in for his injured brother. Although he’s glad he can help his family through a tough time, he is counting the days until he can rejoin his regiment. London holds bitter memories for him that he is anxious to escape. But then he meets the beautiful woman who has found a new lease on life in the very place Nate can’t wait to leave behind.


My thoughts:  Life has a way of taking a different direction than originally planned. This book set in Victorian England illustrates that sometimes the change in direction can be a blessing.

Rosalyn Bernay is a young woman who grew up in an orphanage. She has courage and strength and a deep love of God. She has faith that things will work out, even when she is on the run from an unscrupulous employer. I love that once she sets her path in a direction, she doesn't deviate from her standards and true character.

Her life takes her to the theater. A strange place for a Christian woman during the time period. She finds charity, love, and acceptance in unusual places. She is provided the help and direction that she needs to make a happy life for herself.

Nate is a soldier who has a past that haunts him. He feels that he needs to seek redemption for a mistake that could have been deadly. He is drawn to Rosalyn, but she doesn't fit in with the life that he has planned for himself.

This book has really great characters. They show the opposition in life. Some are worldly, some are godly, some are thieves, and other are full of charity and love. I loved the dynamics of the people who come into Rosalyn's life. The book is well written and has an easy flow for the reader.

Hopefully, Jennifer Delamere will have books featuring some of the characters that I would love to know more about. There is a potential for some great books coming from this one.