June Hamilton left home to pursue her dream of dancing on Broadway. Seven years later, she has one regret: Mel Preston, her teenage crush and onetime summer love. Now a single dad and the head of maintenance at Starlight Point, her family's amusement park, Mel's easy smile still makes her heart beat in triple time. But June came home with a plan. She would spend the summer revitalizing the park's aging theaters, then make a graceful exit back to the big city. Until Mel and his young son start making a powerful claim on her emotions, and June faces an impossible decision…

In Carousel Nights, you’ll meet June Hamilton. She shares ownership of the family amusement park Starlight Point with her brother and her sister. Only twenty-five, she does not plan to settle in and devote her life to roller coasters, cotton candy, and the beach resort. She wants to keep dancing on Broadway, but she comes home for the summer to lend her talent to the live shows at Starlight Point. The summer love she left behind seven years ago, Mel Preston, is still there. He’s the chief of the maintenance department and the single father of an adorable five-year-old son.

One of my favorite scenes in this book is when June joins Mel and his son Ross to have fun at Starlight Point. They ride spinny rides, eat junk food, and put miles on their feet. It’s an experience any parent can empathize with! Here’s an excerpt from that scene: 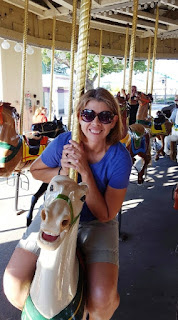 They walked the Western Trail, heading slowly toward the junction where the marina exit gate would veer off. Mel carried Ross with one arm and the boy’s head had dropped lower and lower, giving away the fact that he’d fallen asleep somewhere near the frontier fort.

“Want me to carry you, too?” Mel asked. “Still got one shoulder available and you’re not heavy.”

“Noticed you limping a little.”

Mel laughed. “Okay, you’ve been dancing since we got off the train at the Wonderful West platform.”

“What made us think getting off the train would be a good idea?” June asked.

“My fault. I remember saying something asinine about tiring Ross out so he’ll sleep tonight.”

“Who knew you were such a genius?” June said, grateful that Mel carried a heavy burden so he wouldn’t notice her slow, small steps. The past month had allowed her to forget about her knee for the first time in almost a year. Exercises and stretching, lots of walking and limiting her dancing to almost zero had refreshed her body. Her immense physical well-being, despite long days, overshadowed her worry about the brief window of opportunity on the big stage.

However, on a night like this, when her body refused to play along, she wondered if that window had already closed.

“How are you getting back?” Mel asked.

June’s head snapped up. Had he guessed her thoughts?

She nodded. “Habit. Not much sense driving across the parking lot to the Old Road.”

Mel shifted the weight of his sleeping son to the other shoulder. “Come with me to the marina lot and I’ll drive you home. Save you a lot of walking.”

“I’m serious. My feet would never make it that far. And I owe you for riding the spinny rides with Ross.”

June laughed. “You do owe me, but you have to get Ross home. And if you don’t merge onto the Point road in the next twenty minutes, you’ll get caught in the closing traffic and sit for an hour.”

They came to a bench near the railroad crossing and a nacho stand. “I’m parking myself here with a cold drink. When security sweeps the trail in half an hour, I’ll bum a ride.”

Mel paused and looked hesitant. His T-shirt was creased, hair awry, five o’clock shadow visible even in the dim lighting on the trail. It was time for him to go home.

June plopped down on the bench. “I’m not moving another inch and you’re flirting with a traffic jam every minute you hang around.”

“Rather flirt with you.”

“That’s what I was thinking.” He paused, screams from the roller coasters breaking the silence. “Tomorrow night. A date?”

June swung both legs onto the bench, buying herself a moment before she answered.

“Dinner and adult conversation. No spinny rides or queue lines,” he added, sweetening the deal. “And not at the Point. We’ll go somewhere. Wherever you want.”

Saying yes was tempting, but it was risky. Crossing a line.

“Are you sure this is a good idea?” she asked. “We’ve…uh…been down that road.”

“And nothing has changed.”

“If by nothing you mean you’re still leaving—again—at the end of the summer, I know,” he said.

“What if we’re still too tired to move by tomorrow night?”

“Say yes, June. We’ve known each other for twenty years and eaten a lot of meals together. I want to say thank you for giving my son a fun day.”

June lay full out on the bench. It was cold and hard but still a slice of heaven.

Carefully supporting his sleeping son, Mel leaned way down and kissed June on the forehead. She closed her eyes, letting the heat from his lips breathe energy through her. More than energy, adrenaline spiked all the way to her toes.

“I’m calling security and reporting a vagrant on a bench by the Nacho Rocket Shop.” 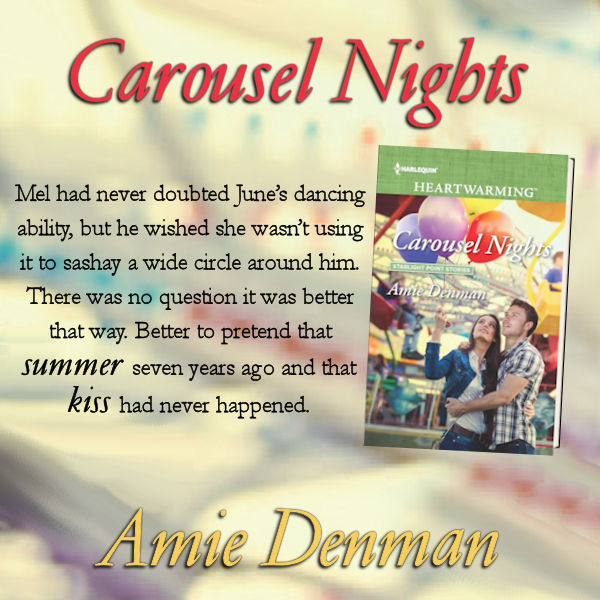 Everyone's counting on him

With the sudden death of his father, Jack Hamilton finds himself running the family amusement park, Starlight Point. His first job? Balance the books, and that means raising the rent for vendors like baker Augusta Murphy.

Gus won't accept the new contract…not without a fight. She rallies the other vendors and sets out to negotiate with Jack. At least, she tries. How do you play hardball with a man who's charming and kind and still grieving? Gus needs to figure it out fast, because the closer she gets to Jack, the more she risks losing everything. 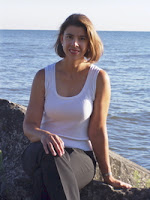 Amie Denman lives in Ohio with her husband, sons, cats, and dog. When she's not reading or writing, she enjoys walking and playing outside. Born with an overdeveloped sense of curiosity, she's been known to chase fire trucks on her bicycle just to see what's going on. Amie believes that everything is fun: especially roller coasters, wedding cake, and falling in love.

10 copies of the first book in the series, Under the Boardwalk (print if US, ebook if outside the US)
Open internationally
Ends September 2nd