Since the age of ten, Mia has lived under the iron fist of the fundamentalist preacher who lured her mother away to join his fanatical family of followers. In Edenton, a supposed “Garden of Eden” deep in the South American jungle, everyone follows the Reverend’s strict but arbitrary rules—even the mandate of whom they can marry. Now sixteen, Mia dreams of slipping away from the armed guards who keep the faithful in, and the curious out. When the rebellious and sexy Gabriel, a new boy, arrives with his family, Mia sees a chance to escape.

But the scandalous secrets the two discover beyond the compound’s façade are more shocking than anything they ever imagined. While Gabriel has his own terrible secrets, he and Mia bond together, more than friends and freedom fighters. But is there time to think of each other as they race to stop the Reverend’s paranoid plan to free his flock from the corrupt world? Can two teenagers crush a criminal mastermind? And who will die in the fight to save the ones they love from a madman who’s only concerned about his own secrets? 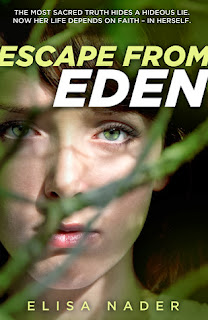 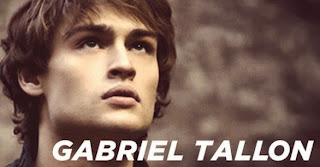 Can I say myself?

You can answer however you like.
Yeah, I know. I just can’t think of anything else right now. And I don’t want to sound like a total douche. I’m not talking to my goddamn parents, so I sure as hell won’t say them. Let me see, what do I love…

Why aren’t you talking to your parents?

Do you see where I’m living now? Edenton. They think it’s Heaven on Earth but it’s my own personal hell. First, there is nothing to do. I mean nothing. It’s like house arrest except you’re not even in a nice house with video games and vodka. You’re in the middle of the freaking rainforest in South America, with 200 brainwashed crazy people who do whatever this equally crazy Reverend says. What is wrong with these people?

Not all. There’s this one girl. Mia. She seems different.

She doesn’t have that glassy, passive look in her eye like the rest of them. She talks back to me, answers my questions. Gives me a hard time when she needs to -- and she needs to. She’s the only other person here so far that seems alive. Except for maybe Grizz the security guard. The punch he threw that connected with my eye is a sign that he’s effing alive.
Why did he punch you?

I’m not as cooperative as the folks here in Edenton would like me to be.

And why aren’t you?

I can’t stay here, with these people, in this place. It’s not natural. These people are… odd. They do as their told like five-year-olds. First chance I get, I’m getting the hell out of here, going back to New York where everyone is crazy but at least they’re honest about it. And she may not know it yet, but Mia is going with me.

Are you sure she wants to escape with you?

Mia wants to escape. WIth me, though? I don’t know. I’m not always her favorite person. I think I get on her nerves sometimes. But once she realizes I’m the only other like-minded person in Edenton, she’ll come with me.

Why is it so important that she comes with you?

She doesn’t deserve this. No one does, but especially her. And maybe… Maybe I don’t want to be alone. 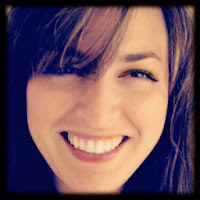 About the author: Hi. I’m Elisa. I like cheese and reading and TV show marathons. Writing is scary, but not as scary as, say, Civil War amputations. I’m an Aquarius. Uh… let’s see… I’m not very good at writing my own biography. Or autobiography. I guess this is reading more like a slightly incoherent personal ad.

(2) Sets of Moleskine Sketchbook, set of Le Pen colored fine tip pens, a copy of Otherkin and Othermoon by Elisa’s crit partner Nina Berry, and a personalized copy of Escape from Eden 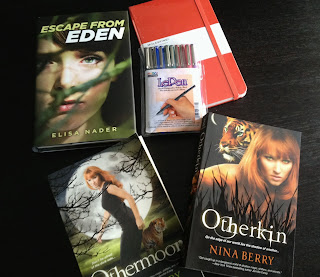