Today on Bookworm Lisa we have the  opportunity to have John Ames as a guest.  He is touring for his book "Adventures in Nowhere" and wants to tell us a little about his book. I want  to thank him for stopping by.

I will now turn the post over to John! 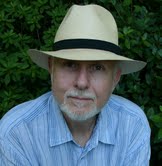 John Ames has a master’s degree in English from the University of Florida, where he was a Ford Fellow. After graduation, he built a rustic house and lived for several years on the edge of a spiritual community located near Gainesville, Florida. John’s search for enlightenment ended when he decided that he was too far from a movie theater. He moved inside the Gainesville city limits and taught English and film for thirty years at Santa Fe College.


He has produced and acted in numerous short films and videos, including the cable TV series the “Tub Interviews,” wherein all the interviewees were required to be in a bathtub. For ten years he reviewed movies for PBS radio station WUFT.  He has appeared as a standup comedian and has designed and marketed Florida-themed lamps.  He coauthored Second Serve: The Renée Richards Story (Stein and Day, 1983) and its sequel No Way Renée: The Second Half of My Notorious Life (Simon & Schuster, 2007), and Speaking of Florida (University Presses of Florida, 1993).
His recent book is a coming-of-age novel titled Adventures in Nowhere.
You can visit his website at www.johnamesauthor.com.

Before Disney and far from the palm-lined Florida beaches, ten-year-old Danny Ryan is transplanted to a tiny community on the hyacinth-choked Hillsborough River outside Tampa, a place his older sister calls Nowhere. But for Danny and his best friend, the irrepressible Alfred Bagley, whose fondest desire is to grow up to be a junk dealer, Nowhere is where adventures lurk and lure them into more trouble than they can handle. More trouble is not what Danny needs as he copes with a family that includes a father sinking into schizophrenia; two sisters, one very ill and the other ready to run away with a shady boyfriend; and a mother trying her best to hold it all together. Adventures in Nowhere paints a compelling, imaginative, and often humorous vision of a time, a place, and a way of growing up, allowing a reader to live for a while in the mind of a remarkably thoughtful and intense boy caught at the final edge of childhood.