Flight of the Spark by Evelyn Puerto 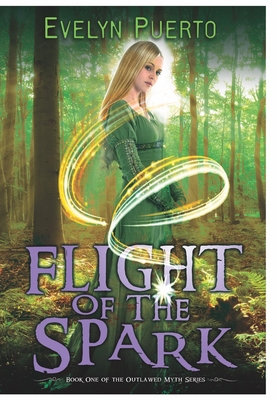 Flight of the Spark: Book 1 of the Outlawed Myth Fantasy Series by Evelyn Puerto
My rating: 4 of 5 stars
Source: Received to Review
Genre: Dystopian

Book Description:  Book 1 of The Outlawed Myth series
Duty. Desire. Destiny.How far would you go to be safe... to be free...to be loved?Iskra doesn't question the rules. The rules are there to keep her safe from those who are deemed unsafe or unfair. Anyone who breaks the rules is taken, never to be heard from again. But that's the price everyone gladly pays for peace and safety. And no one wants to live like the Riskers--barbarians who reject order and justice, and could kill or be killed at any moment.When a friend is taken because of Iskra, the guilt forces her to do the unthinkable: seek out the Riskers. Iskra's quest to save her friend quickly entangles her fate with a cryptic prophecy and a young Risker named Xico, who ensnares her heart and is willing to put it all on the line to win her.With every risk Iskra takes, the closer she gets to true freedom. But every choice carries a consequence. The choices she makes set events she never imagined into motion, and the price of her freedom could very well be her life and the life of the man she loves.


My thoughts: This book became better as the story progressed. I was intrigued at first with Iskra. She lives in a small dystopian village. She is oppressed but doesn't realize it. The village is told that the rules are to keep them safe, but anytime someone asks too many questions, they are "taken". The villagers can't speak about them and none of them know their fate.

At the beginning of the book, Iskra is on a caravan to a neighboring village. They are under heavy guard to keep "safe" from the bandits and the Riskers. She missed the caravan and narrowly escaped being killed by the bandits. She finds herself in a village of Riskers and soon uncovers all of the lies and the secrets that are kept from her and her village.

Iskra is a reluctant hero. She isn't a rule breaker, but the more she gets to know a family of Riskers, the more unanswered questions she has. There is also the teenage son, Xico, who pulls her in.

Ther are many layers of secrets in this story. It was interesting to see each of the lies revealed and the impact they have for Iskra and Xico. There are people she has known and trusted who are not what they seem. With so many voices going around her, it is hard to know who to trust and how to live her life.

The book is told from more than one perspective. This adds an extra layer of understanding to the book. It is nice to know the reasoning and plots that are happening to and around Iskra. I enjoyed the religious aspect of the book. The Riskers believe in an "all-knowing and seeing" diety. There are amulets of power that believers use to access the power and in religious ceremonies.

The ending left me wanting more. I hope that the second book will be released soon!

The book has some fade to black intimacy and violence.

About the Author: (Copied from Goodreads) Evelyn Puerto reads just about anything and writes in multiple genres. When she married, she inherited three stepdaughters, a pair of step-grandsons, and a psychotic cat. Currently she writes from northeastern Wisconsin, but soon will be heading south for shorter winters.
Visit her WEBPAGE.