Behind the Light of Golwduyn by Deborah M. Hathaway 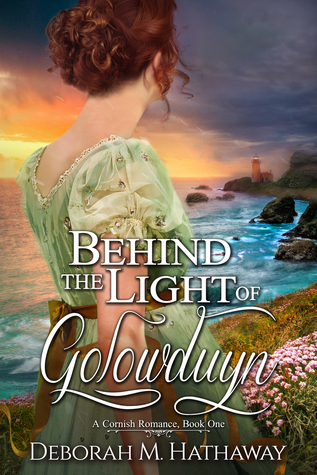 Behind the Light of Golowduyn by Deborah M. Hathaway
My rating: 4 of 5 stars
Source: Free promo on Kindle
Genre: Historical Fiction

Book Description:  She’s the keeper of Golowduyn Lighthouse. He’s the captain who shipwrecked on her watch. A marriage of convenience can save her home—if secrets don’t destroy it first.

Abigail Moore will do anything to keep Golowduyn Lighthouse shining brightly, even if she must do so alone. When a shipwreck occurs near her home one stormy evening—bringing with it a dashing captain keen to offer his aid at every turn—her days of isolation vanish.

Captain Gavin Kendricks didn’t expect to end his naval career by crashing his ship against the rugged cliffs of Cornwall. When he’s pulled from the sea by the fearless and quick-tempered Miss Moore, a tentative friendship forms between them, and he begins to realize what has been missing from his life.

Before either of them can explore these newfound stirrings, death and deception hit Golowduyn, and Abigail is left with a choice. Either she loses everything she has ever loved, or she marries the captain and accepts his help. Unable to give up the lighthouse, she agrees to the union, and they work together to see that the light does not diminish. But when her childhood secrets are unearthed, and their property falls victim to troubling defacement, their marriage threatens to crumble. Gavin fights to gain her confidence, but only Abigail can forget the crippling memories of her past to trust Gavin with Golowduyn—and her heart.


My thoughts: This story was enticing. The more I read, the more I wanted to read and find out if Abigail and Gavin would have a "happily-ever-after." The story is made up of some very good people, and some with flaws but are trying to do their best.

Abigail has been doing the work at her Uncle's lighthouse, he was injured and cannot go up and down the stairs to light the lanterns. She is strong and capable of doing work that men would think a woman could not physically perform. The lighthouse is her sanctuary. She was saved from a destitute life when her Uncle brought her there many years before.

She has a strong desire to help the sailors when they are shipwrecked on the shore. She takes it personally that the lighthouse somehow failed them. One particularly stormy night, she rescues Captain Gavin Kendricks and his sailor. From that moment, Gavin feels compelled to help her in any way he can, including offering to marry her when her Uncle passes leaving her penniless and deeply in debt.

This is a love story that begins as a friendship of sorts. Abigail resents Gavin and resists his efforts to help her, but eventually, they begin to realize that they need each other. I don't want to say much more about the plot, because I don't want to give away the angst and danger in the book.

Suffice it to say, I enjoyed this book and plan on reading more from Deborah M. Hataway.

This book is available for Kindle Unlimited!

About the Author: (Taken from Goodreads)  Deborah M. Hathaway graduated from Utah State University with a bachelor's degree in English and an emphasis in Creative Writing. As a young girl, she devoured Jane Austen's novels while watching and re-watching every adaptation of Pride & Prejudice she could entirely capture by all things Regency and romance.
Throughout her life, she wrote many short stories, poems, and essays, but it was not until after her marriage that she was finally able to complete her first romance novel, attributing the completion to her courtship with, and love of, her charming, English husband.Deborah finds her inspiration for her novels in her everyday experiences with her husband and children and during her travels to the United Kingdom, where she draws on the beauty of the country in such places as Ireland, Yorkshire, and her beloved Cornwall.She is thrilled to have three novels out and is nearing the completion of her fourth clean romance, which is based, of course, in Cornwall.

Visit her WEBPAGE!
Posted by Bookworm Lisa at 5:00 AM