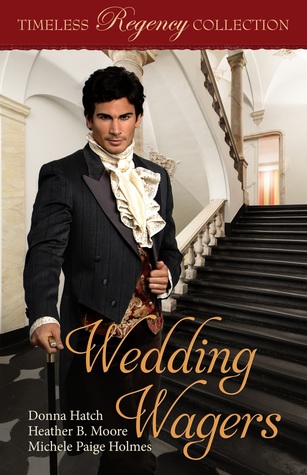 
Book Description:  Three wagers. Three couples. Three chances at love. Let the bets begin.
From the publisher of the USA TODAY bestselling & #1 Amazon bestselling Timeless Romance Anthology series in Regency Romance, comes WEDDING WAGERS. Featuring bestselling authors Donna Hatch, Heather B. Moore, and Michele Paige Holmes.A WAGER FOR LOVE by Donna Hatch:For once, Phillip would like to be seen as more than the younger brother of a duke. When he unexpectedly meets the one girl in all London who doesn’t give two figs for his rank in society, she won’t give him the time of day. Determined to gain her attention, he accidentally tips over her boat and dumps her into a river. Not the best way to convince a lady of worth that he is a gentleman of promise. Frustrated, Phillip makes a rash wager with a friend: he vows he’ll not only gain her forgiveness, but her hand in marriage by the end of the Season. The stakes are high in this romantic Regency romp!THE FINAL WAGER by Heather B. Moore:When Victor Roland, Earl of Locken, enters into a game of twenty-one with Lord Southill, the stakes get quickly out of control. Before Victor knows it, Southill is betting the dowry of his sister. While completely illegal, Victor is mostly insulted, so he does what any gentleman of the ton should do. He punches Southill out. Problem is, Southill is in so much debt that he’d been kicked out of his townhouse earlier that day. So Victor is forced to deliver Southill at his estate outside of London . . . only to meet Southill’s sister, Lady Juliet, a woman who Victor now wishes he’d bet on.AN IMPROBABLE WAGER by Michele Paige Holmes:Sherborne Alexander Rowley III has come home to marry his neighbor—and solve his financial problems in one fell swoop. Love doesn’t figure into the equation, only the need to save his family’s estate. The reserved Miss Emily Montgomery seems willing enough, leaving the only possible obstacle to Sherborne’s success his childhood friend, Eli Linfield, and the wager they made long ago that Eli would be the one to marry Emily. When the timely birth of a colt, Emily’s mischievous sister Sophia, and Emily herself all conspire to ruin Sherborne’s plans, one night of mayhem unravels far more than their betrothal. Emily is not as demure as he believed, nor is Eli what he has pretended these many years. Yet the future for all may yet be bright. Sherborne might even wager on it.


My thoughts: Love is always a gamble, particularly when a wager is involved. This book has three anthologies that have a wager made about marriage as part of the plot. All three are set in England during the Regency Era.

I loved the stories. Each of the stories were written by a "go to" author for me. Donna Hatch's story is humorous. The MC's meet when he accidentally has her take is swim in the Thames. It is not a likely way to begin a courtship. It was a wonderful story to read. It had a great start, middle, and finish.

Heather Moore's story is more of a damsel in distress book. The damsel is a strong character who could find her way in the book, but having a handsome man to help her along doesn't hurt. This was another wonderful book to read. In saving her, he saves himself.

Michele Paige Holmes' story has some interesting twists. I didn't see some of them coming. I will say that both of the male MC's get what they deserve in the end. This story also has some humorous moments that made it a lot of fun to read.

All three of the stories are clean. There is some innuendo and kissing.