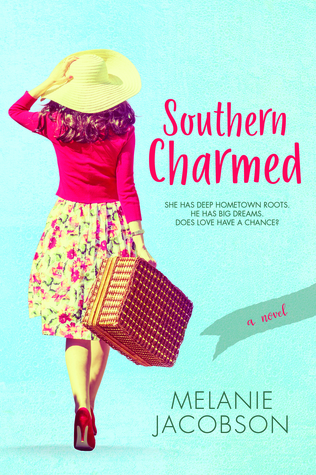 Southern Charmed by Melanie Jacobson
My rating: 4 of 5 stars
Source: Received from the publisher to Review
Genre: Contemporary LDS Romance

Book Description: Lila Mae Guidry is a Southern girl through and through. As a fourth-generation Latter-day Saint in Baton Rouge, Louisiana, she’s proud of her heritage as both a Southerner and a Saint—and she doesn’t take kindly to people who disparage either. Ten years ago, Max Archer was just that kind of jerk. As the mission president’s son, Max spent his entire three years mocking the South . . . and teenage Lila. After Max’s family moved away, Lila forgot about her sworn enemy. Almost.
When a new job brings a grown-up Max back to Baton Rouge, Lila is less than thrilled with his reappearance, especially since everyone seems intent on throwing her together with this old adversary. Yet fight as she may, Lila soon realizes resistance is futile—their connection is undeniable. Max embodies everything she wants in a man—except perhaps the most important thing—her life is rooted in the city she loves, but his dreams are bigger than Baton Rouge. With such mismatched visions of the future, Max and Lila are faced with a life-altering decision: jeopardize their aspirations or risk losing love.


My thoughts: Teenagers do stupid stuff. In my opinion, it's a fact. Max Archer was an arrogant young man who made a very bad impression on Lila Guidry. He was condescending of her beloved Baton Rouge.

Ten years later he comes back, this time he is employed in Baton Rouge and he wants a do-over. He wants a chance to make a new impression. Will Lila let him? Will she hold a grudge forever? Or will she give him the second chance? One thing in his favor is the obvious chemistry they have.

I really like romance books that give characters a chance to redeem themselves. Max has a lot of redeeming to do. At the same time I think that Lila needed a little humble pie see that other people are allowed their own opinion and it doesn't mean that they are nonredeemable.

This is a cute romance that is set in the Southern United States. Both of the characters are wonderful with a bright future ahead of them. They obstacle is whether or not that future includes the other. It is full of Southern culture, love, and some kissing.

One part of the book brought tears to my eyes. It has nothing to do with the romance, but the worth of individuals. Lila teaches high school history. She makes an impact on one student. Her example and love show this young woman that she is of infinite worth and value. I loved the romance, but I loved the positive relationship between student and teacher more.

This is a clean romance that has features the LDS religion and culture.

About the Author: (taken from Deseret Book)  Melanie Bennett Jacobson is an avid reader, amateur cook, and champion shopper. She consumes astonishing amounts of chocolate, chick flicks, and books. After meeting her own husband on the Internet, she is now living happily married in Southern California with her growing family and a series of doomed potted herbs.
Visit her WEBPAGE.