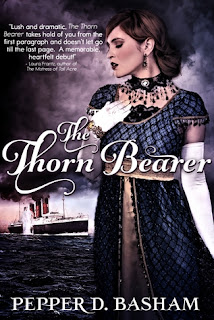 Other books in the series:
2-The Thorn Keeper (coming February, 2016)
3-The Thorn Healer (coming TBD)

When Ashleigh Dougall’s fiancé leaves her eight months before their wedding, the unexpected blow ignites a battalion of insecurities stemming from her father’s intimate betrayal. In an attempt to escape her shame, Ashleigh boards the ill-fated Lusitania to cross the war-torn waters of Europe. Much to her dismay, she isn’t traveling alone.

Sam Miller is always making up for his best friend’s mistakes. Determined to help his childhood friend, Ashleigh, he offers his compassion and companionship as she ventures across a perilous sea. With the faint hope of renewing his lost love for Ashleigh’s sister, Sam never expects to find the woman of his dreams in the love of his childhood friend.

Neither are prepared for the life-altering and heart-breaking journey of their friendship.

Look for the series to continue:

The last remnants of the thick morning fog clung to the horizon, but with a bright sun overhead it promised a full evaporation within the hour. A mixture of relief and fear washed over her. Land. With the warnings of torpedoes, nothing looked more reassuring, but with landfall came a closer step to Catherine- and Ashleigh’s next conflict. What price would she have to pay to convince Catherine to be with Sam? Were there other romantic options in Ednesbury besides her faithless sister?
“Are you alright?”
Sam’s voice broke through her thoughts.
“Why didn’t you bring your plate camera? Didn’t you say it made clearer photos?”
“It’s with my luggage.” He shook his head and placed his palm over his heart. “My pride and joy and much too nice a camera to toss around on the deck of a ship.”
His gaze held hers until she returned his smile. The power the man had over her was unnerving. Her stomach twisted at the thought. Another man with power over her? She stepped toward the railing and looked out toward the coastline. A gray-green mound broke the line of the horizon. Sunlight sparkled across the waves. She blinked her eyes open against the sun’s relfection on the horizon. It was easy to see God in the vastness of the sea and the strength of those waves. A frown pulled at her bottom lip. So where was all that power years ago? Did He even hear her cry for help? She closed her eyes to the sun’s warmth and breathed in the salty air as it sent her well-kept hair into chaos. Her thoughts almost formed into a prayer, years of habit and necessity. But He didn’t care.
“Ash, come take a look at this view.”
She pushed away her thoughts and walked to Sam’s side. Carefully she leaned close to the small leatherbound box on its precarious tripod perch. Sam hobby had grown into a little business back in Millington, even finding some of his photographs of Appalachia in a few magazines, but Ashleigh had never grown adept in working the tiny device. Her hand reached to steady the instrument and brushed against Sam’s fingers. She attempted to pull her hand back, but he captured her fingers and placed them on the side of the camera, firming his palm over them.
“Hold it like this.”
He stood behind her now, his arms hemmed her in on each side to steady the camera and his breath warmed her ear. She swallowed, or tried to, but her dry mouth wouldn’t cooperate. Stop these feelings, Ashleigh. Ignore them.
She forced the rising heat in her chest to chill and took a deep breath, attention fixed on the site through the lens. It was remarkable how one could frame a piece of the world. The monstrous ocean wasn’t as frightening in such small doses. In fact, the angle at which the sun glazed the water held a magical, almost hypnotic quality. So vast and mysterious, and yet as beautiful as starlight’s reflection in a pond.
“It’s beautiful. It truly frames the world.”
“One of the many reasons I’m obsessed with it, I think.” Sam’s voice smoothed past her ear. He guided the camera to a different scene, nearer the coast. She ignored the influence of his closeness to the chaos in the pit of her stomach. “Can you see the coast now?”
“Oh yes, it’s lovely.” She pulled back and smiled up at him, but hadn’t calculated his extreme closeness.
His face hovered just above hers, eyes so intense, she thought he might read her rebel thoughts. His brow tilted upward, slightly, as if he was searching for an answer to an unvoiced question.
She didn’t have an answer. She couldn’t have an answer.
As if drugged, she drew her attention from his and back to the camera lens. The sea rumbled out to meet the distant shore, waves as confused as the emotions crashing about in her heart. She couldn’t wait to get off of this boat. There would be plenty of opportunities to flee Sam’s closness in Edensbury. She knew all the hiding places at her mother’s home.
As a child, hiding had been a survival skill honed to near-perfection.
She blinked the framed scene back into view. A strange stream of bubbles broke into her line of vision making a surprisingly straight path through the waves. A fish? Whale? Whatever it was, it moved fast.
“Sam, look here. There’s some strange fish coming up from the water toward the ship.”
His lips quirked into a doubtful smirk as he took the camera. “A fish coming toward the ship?” He peered through. “I don’t know of any fi—” His breath caught and his body stiffened. “No.”
His exclamation pierced through her and echoed from her own lips. “What, Sam? It can’t be—”
“Torpedo on the starboard side!”
The shout rang down from a place above her followed immediately by another from somewhere else on the boat. A chill trembled down her spine. Sam’s gaze locked with Ashleigh’s and everything slowed. Sounds muffled except for the thrumming of her heartbeat in her ears. Sam pushed his camera aside and took hold of her shoulders just as an explosion sent them staggering like ragdolls toward the railing. Ash and dust flew into the air and rained down upon them, a few pieces stinging against her back. No, dear Lord. We’ve been hit.

Pepper Basham is an award-winning author who writes romance peppered with grace and humor. She currently resides in the lovely mountains of Asheville, NC where she is the mom of 5 great kids, speech-pathologist to about fifty more, lover of chocolate, jazz, and Jesus, and proud AlleyCat over at a group writing blog, The Writer’s Alley. Her debut historical romance novel, The Thorn Bearer, released in May 2015, with the second arriving in February 2016. Her first contemporary romance debuts in spring 2016. 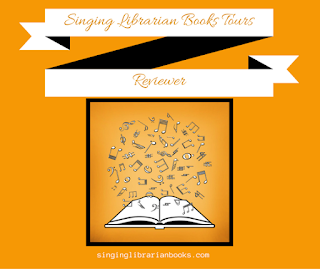 My apologies to Singing Librarian Book Tours and Pepper D. Basham.  This post was supposed to include a review of the book, but I did not read it in time.  I will be reading it at a later date and reviewing it at that time.
Posted by Bookworm Lisa at 3:30 AM