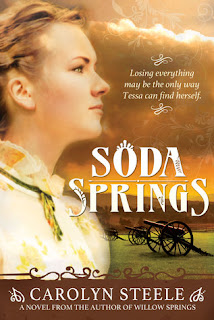 Book Description:  When Tessa Darrow discovers her father burning his Civil War uniform, she has no idea how his secret will devastate their family and drive them from their home in North Carolina. The family journeys along the Oregon Trail until tragedy strikes, leaving Tessa and her father to build a new life in Soda Springs, Idaho. This sweeping story illuminates an oft-forgotten era in LDS Church history. Filled with life and passion, it's a thrilling read for history buffs and romantics alike.


My thoughts: Historical Fiction becomes a favorite genre when I can learn about events in history that I do not know about. Soda Springs is set in a small settlement of people who were a splinter group from The Church of Jesus Christ of Latter-Day Saints. The story itself is not overly religious but takes a look at apostasy and the effects of polygamy on a family.

Tessa is a in her mid-teens when she and her family leave their plantation home during the time period of the Civil War. They leave suddenly just after her father burns his Confederate uniform. Their move is done by wagon and takes a toll on the family, leaving Tessa to play a role far beyond her young years. On their way to Oregon, Tessa and her father find themselves in Soda Springs, Idaho. Also known as Morristown. This is the setting for the majority of the book.

It was interesting to look at life in a small settlement on the Oregon Trail. Some of the characters were people who lived in the area, some are fictional. The countryside was well described and sounds like a beautiful place.

The book follows Tessa as she grows and learns from the people around her. Tessa is romantically interested in William, but her options are not large in the settlement and she wonders if she needs to settle for someone else to be able to have a family of her own. The book is one of patience and learning to love and accept others with differences.

This is a clean historical fiction romance with religious references.

About the Author:  Born and raised in Utah, Carolyn Steele was introduced to western novels at a very young age by her grandfather, the son of a gold miner. She has been writing technical and marketing communications for most of her adult life. Her nonfiction articles have appeared in numerous national magazines. She earned her undergraduate degree in Communications from the University of Utah. Her first novel, Willow Springs, was published in 2014.

I visited Carolyn's webpage and found a post with pictures of the area that the story is set in.  Check it out  HERE.