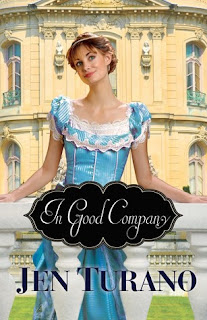 In Good Company by Jen Turano
My rating: 4.5 of 5 stars
Source: Received from Bethany House to Review
Genre: Historical Fiction

Book Description:  After growing up as an orphan, Millie Longfellow is determined to become the best nanny the East Coast has ever seen. Unfortunately, her playfulness and enthusiasm aren't always well received and she finds herself dismissed from yet another position.
Everett Mulberry has quite unexpectedly become guardian to three children that scare off every nanny he hires. About to depart for Newport, Rhode Island, for the summer, he’s desperate for competent childcare.At wit’s end with both Millie and Everett, the employment agency gives them one last chance–with each other. As Millie falls in love with her mischievous charges, Everett focuses on achieving the coveted societal status of the upper echelons. But as he investigates the suspicious circumstances surrounding the death of the children’s parents, will it take the loss of those he loves to learn whose company he truly wants for the rest of his life?


My thoughts: This book is incredibly cute. It only took me a few minutes to love Millie Longfellow's character. She is spunky and a magnet for trouble. She has a natural curiosity about life and the world around her that rubs off on the children in her care. She is a nanny who loves children. She guides them in unconventional ways for the time period. Unfortunately, this gets her into trouble. She tries to use new words, sometimes she gets it right. I enjoyed the many times she misused words.

Millie has a problem, she is attracted to her employer. His station is far above hers and that creates a problem. It is not sociably acceptable for a man with means to have a relationship with a woman who is an orphan and works for a living. Everett also comes with a relationship. He has been courting a socialite for an extended period of time.

It appears throughout the story that the book may not have a happy ending. There are many factors that work against the couple (good people, bad people, and misinformed people).

The children were some of my favorite characters. Who doesn't love a little boy struggling through and identity crisis and wears frocks? Millie relates to the children who are orphans. They have been uprooted from their home and life to live with Everett, an emotionally distant guardian. Millie's goal is to give the children love and acceptance.

The banter in this book is delightful. It's nice to have a woman with a backbone as the main character. Millie doesn't let anyone get the better of her. Many references are made to Jane Austen's Pride and Prejudice, the banter uses the classic as a model.

The book has references to religion, but it is not the major theme of the book. The characters have a belief in God and live their lives accordingly. The book has some kissing and a minimal amount of violence.

About the Author: (Taken from Goodreads)  Jen Turano is a graduate of the University of Akron with a degree in Clothing and Textiles. She pursued a career in management for nine years before switching to full-time motherhood after the birth of her son. When she's not writing, Jen can be found watching her teenage son participate in various activities, taking long walks with her husband and dog, socializing with friends, or delving into a good book. She lives in suburban Denver, Colorado. Learn more at www.jenturano.com.
Posted by Bookworm Lisa at 4:30 AM