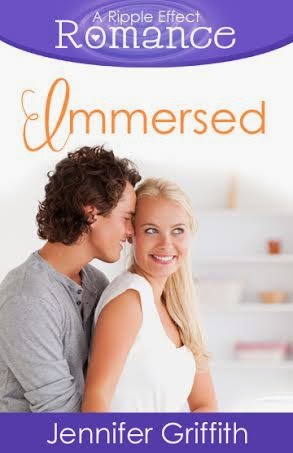 
Book Description: Lisette Pannebaker speaks five languages and has a brilliant business plan—personal language immersion. Clients can hire her to shadow them and speak all day in any language they need to learn for business or travel—whatever. But there’s a major hitch: she’s far too pretty. Clients with less than honorable intentions sign up just have Lisette at their side. Solution? A make-under. Way under.It works like a charm. None of her male clients show her the least bit of interest. Until… Erik. Erik Gunnarsson is charming, kind, and smart—everything she’s ever looked for. Even though he seems to have a secret and she swore she'd never date a client, Lisette is tempted to shed her disguise—even if it means jeopardizing her career.


My thoughts: I love the concept of this series. Different author's taking one of the secondary characters in a previous book and giving them a story. It's fun to see a character that we met in one book, and discover their personality/hopes/dreams in another.

In this story Lisette is a beautiful woman, who is too beautiful. She has launched her own business. She helps people who want or need to learn another language. She stays by them during the day for their contracted time, and speaks to them in the language that they want to learn. It is an Immersion program. It would work well, if the men didn't think of her as their own personal escort, trying to take liberties that are not offered.

Her dilemma takes a new twist when she makes herself under. The beautiful woman is no longer beautiful when she meets her clients. This works well for a year and a half, until Erik hires her to help him with his English. Erik is handsome and kind. The kind of man that she would like to know as herself, rather than the frumpy women he has hired.

I really enjoyed the characters of Lisette and Erik. There are some fantastic secondary characters that provided a great comic element. The book is well written and flows at a quick pace. It was easy to get caught up in the events and anxiously await the page turn and continuation of the story.

This novella is the sixth in the series, but can be read as a stand alone.

Erik Gunnarson was unbelievable. Her mouth went dry when she saw him. Lisette hadn’t seen anything this good in months. Years. Maybe ever. At least not in person. Sure, in movies, when men were all filter-lit and filmed from just the right angle, they might have looked this good, but not in person.
Suddenly the room was far too hot for this stupid fuzzy pumpkin sweater with the shoulder pads. And this wig? She felt like a blooming fool in it.
“Hello. I’m Lisette Pannebaker.” She extended her hand, but immediately saw it tremble. His olive skin. Those dark brown waves in his thick hair. She could feel her voice quavering. Tiny beads of perspiration formed on her upper lip, and she touched the side of her eye, then her neck.
He looked up at her, looked puzzled a moment, and then gave her a crooked smile before standing to shake her hand. When he touched it, the trembling went into high gear, like she’d received an electric shock. Did he feel it too?
“Ah, you are speak the English now. I see.” His voice was like…butter. He cleared his throat and said, “I am please to meet you. My name is Erik Gunnarson.”
The accent came heavy, and the lilt was definitely Scandinavian. She’d lived in Norway, traveled all the Scandinavian countries. Was he Danish? He looked Danish. Lots of Danes she’d met had darker hair. Like Erik’s.
With effort she remembered to speak to him. “Where do you come from, Mr. Gunnarson?”
He squinted and shook his head, a sign she’d seen a thousand times before in these meetings, so she asked it more slowly.
“I come from Reykjavik. No.” He puzzled a moment and then continued. “A village…near…Reykjavik.”
Oh, Iceland. She wanted to ask him all about his life there, his upbringing, his family, his plans for a family of his own, and could she please be the mother of his children?
Get a hold of yourself, Lisette. She nearly slapped herself. This had to be professional. What a crying shame, too. He had such a nice crooked grin. And those upper arms. While most clients wore stinky sport coats over golf shirts or boring business suits and ties, Erik Gunnarson wore a plain grey Henley shirt—and looked like he’d just been at Henley itself, pulling the oars in the Thames. Those triceps. Who did he think he was? Thor?

Jennifer Griffith studied French, German, Japanese, and a wee bit of Spanish in her school days. Her grandmother was Norwegian, and Jennifer grew up with lots of Scandinavian traditions floating around, including fabulous cardamom laced cookies called Krumkaker, made on a fancy waffle iron. However, she’d never dream of trying to teach someone any of those languages. And she might botch the cookies. Instead, she writes novels in English, drives her five kids a million places, and laughs with her husband, who came up with the plot for Immersed because he’s just a cool muse like that.


Blog Tour Giveaway $25 Amazon Gift Card or Paypal Cash Ends 6/9/14 Open only to those who can legally enter, receive and use an Amazon.com Gift Code or Paypal Cash. Winning Entry will be verified prior to prize being awarded. No purchase necessary. You must be 18 or older to enter or have your parent enter for you. The winner will be chosen by rafflecopter and announced here as well as emailed and will have 48 hours to respond or a new winner will be chosen. This giveaway is in no way associated with Facebook, Twitter, Rafflecopter or any other entity unless otherwise specified. The number of eligible entries received determines the odds of winning. Giveaway was organized by Kathy from I Am A Reader and sponsored by the author. VOID WHERE PROHIBITED BY LAW. a Rafflecopter giveaway
Posted by Bookworm Lisa at 3:30 AM