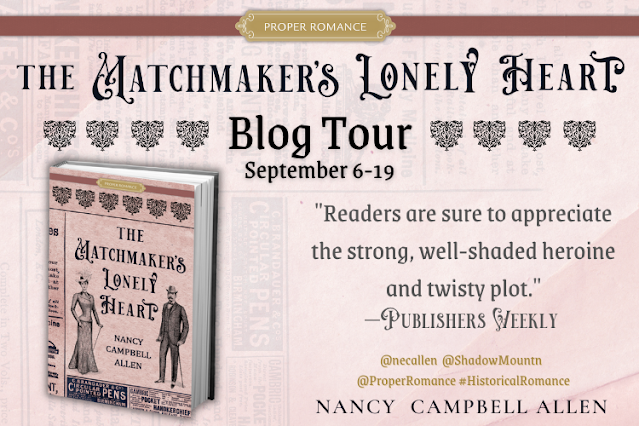 Amelie Hampton is a hopeless romantic, which makes her the perfect columnist to answer lonely heart letters in The Marriage Gazette. When Amelie plays matchmaker with two anonymous lonely hearts, she also decides to secretly observe the couple's blind date. To her surprise, the man who appears for the rendezvous is Harold Radcliffe―a grieving widower and a member of Amelie's book club.

Police detective Michael Baker has been struggling ever since his best friend and brother-in-law died in the line of fire. Because he knows the dangers of his job, he has vowed never to marry and subject a wife and family to the uncertainty of his profession. But when he meets Miss Hampton, he is captured by her innocence, beauty, and her quick mind.

When a woman's body is pulled from the river, Michael suspects the woman's husband―Harold Radcliffe―of foul play. Amelie refuses to believe that Harold is capable of such violence but agrees to help, imagining it will be like one of her favorite mystery novels. Her social connections and clever observations prove an asset to the case, and Amelie is determined to prove Mr. Radcliffe's innocence. But the more time Amelie and Michael spend together, the more they trust each other, and the more they realize they are a good team, maybe the perfect match.

They also realize that Mr. Radcliffe is hiding more than one secret, and when his attention turns toward Amelie, Michael knows he must put an end to this case before the woman he loves comes to harm.

My thoughts: Nancy Campbell Allen is a very versatile writer. This book is set in the Victorian Era. I have read books she has written that are steampunk, Historical (Civil War), Regency, and time travel. She excels at all of the genres.

This book is more of a murder mystery. Amelie Hampton and Michael Baker are on the case to solve the murder of Mrs. Radcliffe. The main suspect is her husband, who has also set his cap for Amelie. Can Amelie prove that Mr. Radcliffe is not the murderer or will Michael prove that he is?

The best part of the story is what happens between the beginning and the end! (I know, that is a very broad statement.) This story is character and mystery-driven. I loved getting to know the main characters. There are a few amazing secondary characters that I would love to read more about in future books. (Hint, hint) Amelie wants to prove that she can be an independent woman while Michael does not see a family in his future because of the precarious nature of his career.

Romance is a part of the book, but it is not the primary emphasis. I enjoyed the investigative process and how everything comes together.

About the Author: Nancy Campbell Allen is the author of fifteen published novels and numerous novellas, which span genres from contemporary romantic suspense to historical fiction.  In 2005, her work won the Utah Best of State award, and she received a Whitney Award for My Fair Gentleman. She has presented at numerous writing conferences and events since her first book was released in 1999. Nancy received a BS in Elementary Education from Weber State University. She loves to read, write, travel, and research and enjoys spending time laughing with family and friends. She is married and the mother of three children.

"Allen pairs a matchmaker and a detective in this charming Victorian romance. Allen expertly combines mystery and romance into a fast-paced tale complete with plenty of surprises and a central relationship founded on mutual admiration and respect. Readers are sure to appreciate the strong, well-shaded heroine and twisty plot." —Publishers Weekly

"Allen's chaste tale of Victorian romantic suspense will also appeal to historical mystery readers, and it would be great for mother-and-daughter reads. This has great appeal for teens who like historical fiction laced with mystery and romance." —Booklist

“I was immediately drawn into the characters’ lives and enjoyed the unraveling of the mystery and the development of the romance.” —Mystery and Suspense Magazine