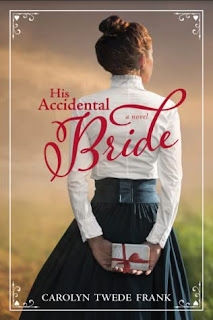 His Accidental Bride by Carolyn Twede Frank
My rating: 4 of 5 stars
Source:  Received to Review
Genre:  Historical Fiction
Book Description:  Dorothy Bednar is living a life she despises. Forced to work as a double-dealing saloon girl, Dorothy has finally had enough. The next train out of town is her ticket to freedom, and Dorothy jumps aboard without a thought for where she’s going—until she meets a kind woman aboard the train. Her fellow passenger was originally traveling to Colorado to marry a man she’d never met, but her cold feet offer Dorothy the perfect opportunity to set up roots somewhere new. Dorothy soon finds herself posing as the mail-order bride—after all, marrying a stranger can’t be worse than what she left behind.
Young Colorado lawyer Ronald Smith is astonished when he spies the lovely woman who comes to greet him—the woman who is to be his wife. Dorothy is beyond Ronald’s wildest dreams, a kindhearted partner eager to be a homemaker and mother. To Dorothy, Ronald is the most gentlemanly man she’s ever met—a man who makes her feel safe and cherished. What begins as a deception soon deepens into true love, but too soon, Dorothy’s secret past threatens the beautiful life she’s built—a life that feels truer than anything she’s ever known.

My thoughts: If you add up a good-for-nothing brother, a mail-order bride, physical abuse, and a really great guy who wants to get married you get His Accidental Bride. There is more to the story, but I feel that these are some of the prominent plot points.

Dorothy Bednar is a good young lady who is caught up in a life that she wants to run away from. Her older brother has her commit crimes and beats her when she doesn't comply. A quick run to the train station leads her to Miss Cooper, who is traveling West to meet her groom. Dorothy's intrusion gives Miss Cooper an excuse to run away from her situation. Win/Win!? No, it never turns out pretty when those things happen.

Dorothy had good intentions to deliver the letter from Miss Cooper to Mr. Ronald Smith, but he was too nice and she kept getting lost for words. Next thing you know, everyone thinks that she is Miss Cooper. What is a nice girl to do? Play along until she can extract herself from the situation.

This was a cute book. I loved Dorothy and Ronald. I hated Dorothy's brother and another bad guy in the book. I loved the setting of a small town in Colorado set in the 1800s. I also loved that the book was about forgiveness and making a fresh start.

There were a few places where the pacing was a bit slow, but overall, I didn't feel like it detracted from the story.

This is a good, clean, fun novel that left me feeling good at the end. 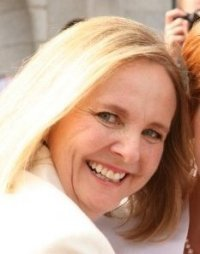 About the Author: (From Goodreads)  About my writing: I don't like to write candy for the brain. But I do like to try to make my books not only fulfilling, but entertaining. Candy is nice, but a meal of meat, potatoes, and veges can leave you more satisfied. My books give the reader a good taste of history and/or science along with a dash of mystery folded into the story.
About me: I've always loved writing, but haven't gotten serious until the past seven years. When I'm not writing, I like to garden, sew, fix up old houses, or anything else creative. My favorite movies are ones about history.
Visit her WEBPAGE!
Posted by Bookworm Lisa at 2:02 PM