The Counselor by Curtis Taylor 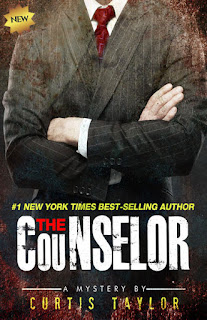 The Counselor by Curtis Taylor

Book Description: Late one night Travis Call is awakened by a knock at the door. After months of suspense, the police have arrived with the news he dreaded: His wife, an up-and-coming actress, is dead.

And they suspect him of her murder.As a young financial counselor, Travis has made millions for his clients, but a recent diagnosis of Lyme Disease has compromised his ability to think, to remember, to make good decisions. And now he may be in over his head with a new and suddenly rocky investment.Travis is also a counselor in the bishopric of his ward at church. And now that he is suspected in his wife’s murder, he will almost certainly be released—or will he? Maybe the bishop knows more than the police do.It’s a certainty that somebody close to him does.With almost too many suspects to count, Travis has to find the real killer—before the real killer grows even bolder and silences him.

My thoughts:   Curtis Taylor is a "new to me" author.  I think that I have been missing out. I'm going to have to read a few more of his books.

Travis is an honorable man who is placed in a difficult situation.  His wife has been missing for nine months and her body has just been found.  Everyone is suspect, including Travis and a young missionary.

I was enthralled from the moment I started reading.  This is a book that captured my attention from the first page.  Curtis is on the hunt for the killer.  I was intrigued by his process and how the information came to him to help him find the person who murdered his wife.

The book is a little longer than I thought it would be, but it is well worth the time to read.  There are religious aspects to the story.  Travis is a member of The Church of Jesus Christ of Latter-Day Saints.  His religion is mentioned as part of his character, but not a major aspect of the mystery.

Online Purchase Links:
Amazon * Aspen Books
It is part of the Kindle Unlimited program.
"A top-drawer murder mystery . . . A page turner. . . . It's a remarkable tale about people you care and root for."—Roger W. Hoskins, journalist, entertainment writer, crime reporter (ret.)
About the Author:  Curtis Taylor is a writer of fiction, nonfiction, and screenplays. His fiction includes "A Grand Conspiracy," "The Counselor," "American Grace," "The Dinner Club" (revised as "Rolling Home"), and "The Invisible Saint" (revised as "The Invisible Saint Revisited"). His nonfiction includes "Embraced By The Light" (co-authored with Betty J. Eadie), and "The Burning Within (co-authored with Ranelle Wallace). His most recent screenplay is "The Review," a story set loosely on "American Grace." He and his wife, Janet, live in Modesto, California.

Posted by Bookworm Lisa at 6:25 AM